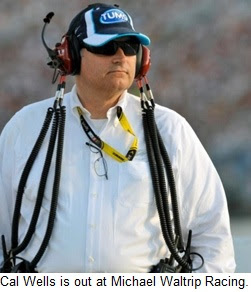 Michael Waltrip Racing announced today that the organization has parted company with Executive Vice President of Operations Cal Wells, effective immediately. Wells had been with MWR since the earliest days of the operation and was responsible for overseeing day-to-day operations of its NASCAR Sprint Cup and Nationwide Series teams. A statement from MWR said the parting was “mutually agreed,” but sources within the organization say the decision was made by team owners Waltrip and Rob Kauffman.

“We want to thank Cal for his strong contribution to getting Michael Waltrip Racing to where it is today, said Kauffman. “We wish him the very best in his future endeavors. We plan to go forward now with the solid management team that is in place, and bring MWR to the next level.”

Before joining MWR, Wells owned and operated PPI Racing, winning a pair of Cup races with driver Ricky Craven. No replacement has been announced.
Posted by Dave Moody at 8:48 AM