Knee-deep in his quest for the 2011 NASCAR Sprint Cup Series championship, the last thing Carl Edwards needs is distraction. Unfortunately, barring an unexpected announcement of his plans for 2012 and beyond, distraction is exactly what he has in store. 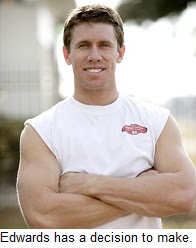 Edwards is the leading player in this season’s edition of the NASCAR Free Agent Derby, along with Richard Childress Racing’s Clint Bowyer and Ganassi Racing’s Juan Pablo Montoya. Both Bowyer and Montoya are expected to re-up with their current teams, however, leaving Edwards as the Belle of the Ball. He currently entertains at least two offers, from current employer Roush Fenway Racing and determined suitor Joe Gibbs Racing. Jack Roush has made it clear that re-signing Edwards is at the top of his personal to-do list, and Joe Gibbs Racing president JD Gibbs has admitted interest in fielding a new, fourth JGR Toyota for the Missouri native if suitable sponsorship can be found.

In terms of competitiveness, both RFR and JGR both have a lot to offer. Roush Fenway has carried Edwards to the pinacle of the NASCAR Sprint Cup Series championship standings, with one win and a series-high 10 Top-5 and 13 Top-10 finishes in 19 starts. Gibbs is not far behind, however, with Kyle Busch fifth in points – after leading the standings just a few weeks ago -- and Denny Hamlin tenth. If the Chase were to begin today, Busch and Kevin Harvick would top the standings on the strength of three wins already this season. In terms of winning races and contending for championship, both Roush and Gibbs fill the bill. ADVANTAGE: PUSH

Roush Fenway’s engine department continues to crank out a steady stream of stout, reliable powerplants. JGR, meanwhile, has struggled with multiple engine-related failures this season, prompting unconfirmed reports that the team will shut-down its engine shop and utilize horsepower from Toyota Racing Development next season. JD Gibbs has denied those reports, but the uncertainty continues. ADVANTAGE: ROUSH FENWAY

In addition to his Sprint Cup effort, Edwards has been a steadfast supporter of the NASCAR Nationwide Series in recent seasons. Both Roush and Gibbs have top-notch Nationwide efforts, winning a high percentage of their starts in the series. Edwards confirmed recently that he will not run the full Nationwide schedule next season, telling ESPN, “I will focus on the Sprint Cup and my family. It will be a big change for me.” Both Roush and Gibbs would still be happy to put “Cousin Carl” in their Nationwide cars for a limited Saturday afternoon schedule, however. ADVANTAGE: PUSH

Another factor in Edwards’ decision is cold, hard cash. Faced with a choice between two competitive race teams with impressive track records, personnel and resources, “green pictures of dead presidents” could easily tilt the scales in one direction or another. Roush Fenway Racing is viewed – justifiably or not – as one of the less generous employers in NASCAR, while Joe Gibbs is believed to have a slightly looser wallet. ADVANTAGE: GIBBS

Gibbs, however, is handcuffed in his ability to talk dollars and cents until an actual sponsor is signed. ADVANTAGE ROUSH FENWAY

Edwards continues to insist that he has not made up his mind on where he will race in 2012 and beyond. And the longer he waits, the more of a distraction the situation will become.
Posted by Dave Moody at 12:55 PM