Menard Scores Another For The First-Timers 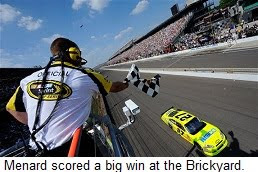 Add Paul Menard’s name to the list of first-time winners on the 2011 NASCAR Sprint Cup Series. Hot on the heels of Trevor Bayne’s stunning victory in the season-opening Daytona 500, Regan Smith’s upset win in the Southern 500 at Darlington and David Ragan’s triumph in the Coke Zero 400 at Daytona, Menard etched his name onto the list of new 2011 winners in what is rapidly becoming one of the most competitive seasons in the sport’s history.

Menard made the most of superior fuel mileage Sunday, soft-peddling the throttle down the stretch until being given the “Go get `em” by crew chief Slugger Labbe with just four laps remaining. He bypassed defending Brickyard 400 winner Jamie McMurray – who was also attempting to save fuel – then held off a furious charge from Jeff Gordon to claim his first career Sprint Cup win in 167 starts.

Menard’s victory made him the 14th different winner in 20 Sprint Cup races this season; one more than in all of 2010. With drivers like Dale Earnhardt, Jr., Tony Stewart, Clint Bowyer, Kasey Kahne, Greg Biffle and Juan Pablo Montoya yet to visit Victory Lane, it’s conceivable that 20 different drivers – or more -- could hoist the winner’s hardware before season’s end. Menard was also the 10th different winner in the last 13 superspeedway races; proof positive of a competitive era unrivaled in the history of the sport.

While the numbers added-up in NASCAR’s favor Sunday, the big winner was Menard, whose father, John, has owned and sponsored cars in the Indianapolis 500 for decades, but never gotten closer to the brass ring than a third-place finish with Al Unser, Sr. in 1992. "I've been coming here since I was a little kid, and my dad's been trying to win here for 35 years," said a champagne-drenched Menard afterward. “I saw my dad as soon as we pulled into Victory Lane. He came up to the window and I said, ‘35 years of trying here… this one's for you.’ It’s definitely for him. He's put a lot of time and energy into winning at Indy. It's just a big deal.” 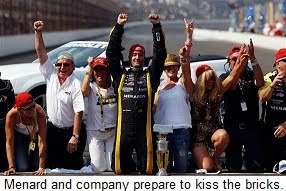 Menard smiled when asked about outrunning home-state drivers Jeff Gordon, Tony Stewart and Ryan Newman for the Brickyard victory. “I'm not an Indiana native, but Wisconsin is not far away,” he said. "I spent a hell of a lot of time here as a kid, and I’ve probably been here more days than all three of them combined. It’s a special place for us. There's a lot of emotion. I can't believe we won Indy. This is big."

“It was Paul's day,” said the elder Menard as his son prepared to kiss the legendary Indianapolis Motor Speedway Yard of Bricks. “He came down here as a very little guy. I remember smuggling him into the garage because he was too young to be in there. He would be sitting on the workbench back there behaving himself. He had to be quiet or the yellow shirts would throw him out. He was there, always interested. He wanted to be a race-car driver.

“Our whole family has been at the Speedway for so long. We all tried very hard. I'm just a proud father right now.”

Menard became the first driver to win his first career Sprint Cup race at Indy, pushing himself into the thick of the championship picture with a jump from 19th to 14th in points. He also validated Childress’ off-season decision to hire him, after the soft-spoken Wisconsin native failed to win in stints with Andy Petree Racing, Dale Earnhardt, Inc., Yates Racing and Richard Petty Motorsports.

Sunday’s win was the 98th for RCR, tying Childress with the legendary Wood Brothers for fifth place (fourth among active teams) on the all-time list. Best of all, it silenced – hopefully forever – the whispers of “Rent a Ride” that have dogged Menard since his earliest days in the sport.

If the regular season ended today, Menard and Denny Hamlin would claim the Wild Card berths for the 2011 Chase. If he is able to triumph again at Atlanta Motor Speedway on Labor Day, he’ll pocket a cool million dollars for winning the Sprint Summer Showdown. Those two facts should go a long way toward putting any further discussion of “daddy’s money” to rest, once and for all.

Paul Menard is a Sprint Cup Series winner at last, and he did it on one of the grandest stages in the sport.
Posted by Dave Moody at 8:22 PM