Pastrana Waltrip Racing has withdrawn its #99 Boost Mobile Toyota from tomorrow night’s race at Lucas Oil Raceway, where Travis Pastrana had been scheduled to make his NASCAR Nationwide Series debut. Pastrana broke his right foot and ankle after back-to-back crashes in the Moto X Best Trick competition at the X Games in Los Angeles yesterday. 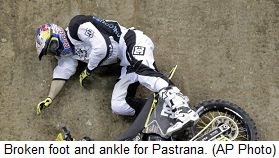 The action sports icon was positioned to contend for the gold medal before missing his second attempt at a corked 720, landing on his leg with the motorcycle on top of him. He jumped quickly to his feet and hobbled for a few steps before slumping to the ground. He was carried from the field on a stretcher and transported to a hospital for X-rays. The injuries to his foot and ankle came just days after he damaged ligaments in his hand during practice for the X Games. He will reportedly undergo surgery on his foot, ankle and hand this week in Maryland, and will be sidelined indefinitely.

Team owner Michael Waltrip announced the team’s withdrawal today, saying, “Like fans everywhere we were so excited about Travis’ debut Saturday night. We have a long term vision with Travis which includes lots of NASCAR. We can’t wait to get him healed and in our race cars. We talked to our sponsor Boost Mobile and agreed to withdraw from Indy and delay our debut. We’ve waited a long time for someone like Travis Pastrana. I guess we’ll just have to wait a little bit longer.”

Pastrana had planned to compete in Best Trick and Freestyle on Thursday and Friday, fly to Indianapolis to make his NASCAR Nationwide debut Saturday, then return to Los Angeles to compete in RallyCross Sunday. If his injuries heal in time, Waltrip said Pastrana's Nationwide Series debut could be rescheduled for Richmond International Raceway September 9.
Posted by Dave Moody at 12:21 PM