Shiplett Out, Erwin In As #43 Crew Chief

Former Roush Fenway Racing crew chief Greg Erwin will replace Mike Shiplett as crew chief for AJ Allmendinger’s #43 Richard Petty Motorsports Best Buy Ford. Erwin was fired last week from his post as crew chief for Greg Biffle, but will be atop the #43 pit box when the Sprint Cup Series returns to action in two weeks at Indianapolis Motor Speedway. 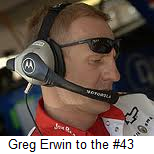 "Mike and I have been together for a long time, so from a personal standpoint this is difficult for me,” said Allmendinger today. “We’ve worked really well together and I think our personalities really complemented each other. Mike and I both came into this year committed to working on our weaker areas. I know we both tried our best to be better and communicate better, I couldn’t have asked for either of us to try any harder. Sometimes though, you need to take a step back and have a new perspective or new set of eyes look at things to move to the next level.

“Greg Erwin is a really talented crew chief and we’re lucky to have him come on board with us,” continued Allmendinger. “He has had a lot of success, brings a fresh perspective and has shown he knows exactly what it takes to win. I’m looking forward to seeing what we can do together and taking the team to that next level.”

In his two-year plus tenure with Roush Fenway Racing and the #16 Ford, Erwin racked up five victories, 36 Top-five and 66 Top-10 finishes, making the Chase three times and finishing as high as third in the year end point standings. “When one door closes, another one opens and this is a great example of that,” said Erwin. “I couldn’t be happier to have found a new home at Richard Petty Motorsports. To work with Richard Petty and lead the iconic No. 43 team is a great opportunity for me. AJ Allmendinger has shown that he has a great deal of talent and I’m excited to have the chance to get the No. 43 team back to Victory Lane.”

Allmendinger is currently 16th in championship points with one Top-5 and four Top-10 finishes, after finishing 12th this weekend at New Hampshire Motor Speedway.
Posted by Dave Moody at 4:31 PM