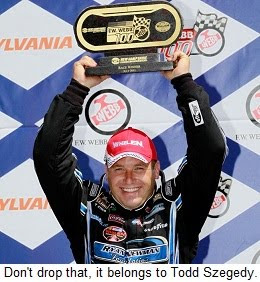 NASCAR has stripped Ryan Newman of his win in Saturday’s NASCAR Whelen Modified Tour “F.W. Webb 100” at New Hampshire Motor Speedway. Newman’s car –- owned by Sprint Cup Series crew chief Kevin “Bono” Manion -– was found to be in violation of a NASCAR rule requiring intake manifold ports to completely seal to the cylinder head ports. Sources say the car’s intake manifold bolts were drilled out allowing air to bypass the restrictor plate, then filled with wax to hide the modification until the engine heated up on the racetrack. Those reports have not been confirmed and NASCAR did not comment on the specifics of the violation.

Newman won the pole by more than three-tenths of a second, and claimed a 1.9 second win over runner-up Todd Szegedy, who now inherits the win. Newman becomes the fourth driver in the 25-year history of the NASCAR Whelen Modified Tour to be stripped of a victory. Crew chief Mike LaRochelle has been suspended from all NASCAR regional touring series events until Dec. 31, 2011. Manion has been disqualified from the race and suspended from NASCAR regional touring competition until Dec. 31.
Posted by Dave Moody at 2:15 PM