Elliott Sadler will drive a new, #24 Joe Denette Motorsports Camping World Truck Series Chevrolet at Bristol in August and Martinsville in November, racing as a teammate to Jason White. 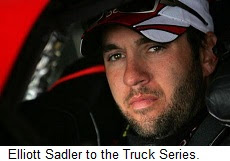 "I've known Joe Denette for a few years," said Sadler. "So when he offered me the opportunity to climb behind the wheel of one of his trucks at Bristol and Martinsville, I jumped on it!"

Sadler has 16 Truck Series starts in the last five season, with a win at Pocono last season, four Top-5 and eight Top-10 finishes. He is one of only 22 drivers to claim wins in all three NASCAR National divisions and one of only 16 drivers to have earned a pole award and win. Sadler said he is looking forward to debuting with the rookie team. "Bristol is one of my favorite tracks," said Sadler. "I've won there in a Sprint Cup car and a Nationwide, car so it would be really cool to get a win there in the Truck Series. Martinsville is in my home state of Virginia, so there will be a little added pressure to do well that weekend. Jason has made some big strides in the past few races and I feel like we'll work well together as teammates."

A sponsorship announcement for Sadler’s #24 Chevrolet is expected in the coming weeks.
Posted by Dave Moody at 1:47 PM