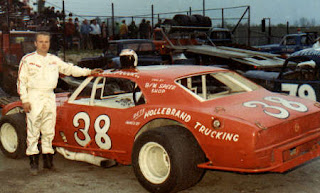 Jerry Cook made his name in modifieds, winning six NASCAR Modified championships, four coming consecutively from 1974-77. All the while, he was vying with another driver from his hometown of Rome, N.Y., nine-time champion and NASCAR Hall of Famer Richie Evans, for supremacy in NASCAR’s open-wheel realm. The rivalry was home-grown – and intense.


Modified racing is NASCAR's oldest form of competition – modifieds were the staple of the very first NASCAR season in 1948. Cook has said the cars’ appeal was based on that history and the fact that the racing is unique within NASCAR.


After retiring from racing in 1982, Cook stayed with the sport and helped shape the series that is known today as the NASCAR Whelen Modified Tour. Cook served as the series’ director when it began in 1985 and remains with NASCAR as competition administrator.


This is the latest in a series of GodfatherMotorsports.com biographies profiling the 25 nominees for the 2012 class of the NASCAR Hall Of Fame. Each of the 25 candidates will be profiled in the coming weeks, in alphabetical order.