Robert “Red” Byron was there at the outset, to say the least. 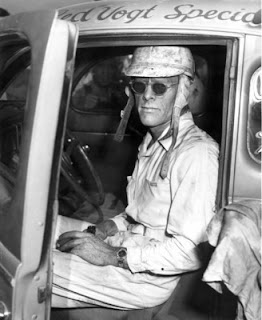 
Wounded in World War II, Byron drove with a special brace attached to the clutch pedal, to assist an injured leg – making his accomplishments even more impressive. That injury contributed to Byron’s relatively brief career, after which he continued to be involved in motorsports.


When he died in 1960 at the age of 45, Byron had branched out, striving to make more history, by developing an American car capable of winning the famed 24 Hours of Le Mans sports car event.


In 1998, he was named one of NASCAR’s 50 Greatest Drivers, recognition of a highly significant career, the relative brevity of it notwithstanding.


This is the latest in a series of GodfatherMotorsports.com biographies profiling the 25 nominees for the 2012 class of the NASCAR Hall Of Fame. Each of the 25 candidates will be profiled in the coming weeks, in alphabetical order.
Posted by Dave Moody at 2:35 PM