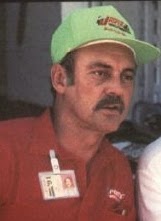 Former NASCAR Winston Cup and Busch Series team owner Ray DeWitt passed away Thursday evening after suffering a heart attack at his home in Sunset Beach, NC. He was 63.


DeWitt fielded cars on the local and regional scene for many years, including an American Speed Association (ASA) operation that included eventual NASCAR drivers Ted Musgrave and Tim Fedewa. DeWitt’s NASCAR national series career began when he fielded Sprint Cup Series Chevrolets for drivers Rich Vogler and Ted Musgrave in a trio of 1990 races at Pocono, Michigan and Rockingham.
He teamed with former driver DK Ulrich to form RaDiUs Racing in 1992, running the full Winston Cup championship schedule with Musgrave, crew chief Buddy Parrott and sponsor Jasper Engines. The team recorded one Top-5 and seven Top-10 finishes that season en route to 18th place in the final championship standings, with a best finish of fifth behind Darrell Waltrip, Harry Gant, Alan Kulwicki and Ricky Rudd at Pocono Raceway in July.
The following year, RaDiUs Racing claimed a pair of Top-5 finishes at Pocono and Michigan with Musgrave at the controls, finishing 25th in the final standings. DeWitt also fielded a full-time Busch Grand National Series effort with driver Tim Fedewa under the D-R Racing banner, finishing 18th in points.
In 1994, DeWitt ended his partnership with Ulrich and concentrated mainly on the NASCAR Busch Series, finishing 10th in points with Fedewa, who was running at the finish of 24 of 28 races that season. He also made 18 Winston Cup starts that year with drivers Jimmy Hensley, Fedewa and Butch Miller.
The high point of DeWitt’s NASCAR career came in 1995, when Fedewa topped Doug Heveron, Johnny Benson, Jr. and brothers Jeff and David Green to win the Meridian Advantage 200 NASCAR Busch Series race at Pennsylvania’s Nazareth Speedway. His final NASCAR start came on Sept. 14, 1996, when a blown engine relegated driver Bobby Dotter to a 35th-place finish in the MBNA 200 at Dover International Speedway.
"If it weren't for Ray DeWitt, NASCAR would never have heard of me," said Musgrave. "He was one of a kind and you always knew right where you stood with him. He was well-off financially, but you would never have known it to talk with him. He was a hard-working man who loved racing and gave a lot of people their chance."
Fedewa shared similar thoughts, saying, “Ray was the guy who believed in me when nobody else did. We started racing in ASA and ARTGO back in Michigan, and he gave me my first real opportunity to shine. If it wasn’t for him, I never would have had the opportunities I had, from ASA all the way to NASCAR.
“Ray was the type owner that was in your corner, no matter what. If I went out and ran the car straight into the wall in qualifying, he’d be right there waiting when I got back to the pits, saying, `don’t worry about it, you did a great job.’ As long as he knew you did your best, he would never complain.
“You don’t see car owners like that anymore. I’ll miss him, and a lot of other people will, too.”