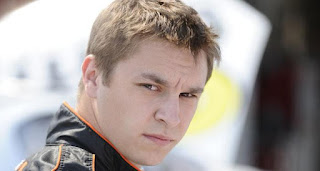 Driver Kevin Swindell is hospitalized in Des Moines Mercy Hospital with unspecified injuries, after a heat-race crash at the Knoxville Nationals last night.

The son of Sprint Car legend Sammy Swindell was airlifted from the race track after a flip at the start of his qualifying heat. His car impacted the outside retaining wall, before landing on its wheels. His family issued a statement last night, saying he is undergoing treatment but offering no specifics on his injuries.

There are unconfirmed reports that he underwent surgery earlier today.

In addition to his Sprint Car exploits, the 26-year old Tennessee native has made 30 career starts in the NASCAR XFINITY Series, with a top finish of eighth at Indianapolis Motor Speedway in 2013. He is also two-time winner in the ARCA Racing Series.
Posted by Dave Moody at 11:23 AM