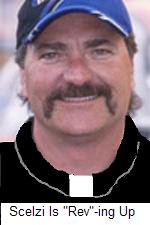 Reverend Scelzi? God Help Us: The Mopar Big Block Party kicks off Thursday from 6 to 10 p.m. (Mountain Time) in Golden, Colorado, kicking off the annual NHRA Mopar Mile-High Nationals. Among the scheduled proceedings will be what is being billed as a “MoPowered Wedding,” in which an obviously deluded pair of Mopar fans will be united in Holy Matrimony by none other than newly ordained “minister” Gary Scelzi.

The four-time NHRA World Champion told Sirius Speedway, “They told me they had a couple of raving Mopar fans who wanted to get married, and have some fun with it. Apparently, there’s some website that will make you an ordained minister, so we’re good to go. It may not be legal outside Colorado – or even outside downtown Golden – but we’ll have some fun with it.”

Assisting “Minister Meatballs” will be Best Man Ron Capps and Maid of Honor Angelle Sampey; a woman who knows more than most about getting married. “If I forget the words to the vows, Angelle can bail me out,” said Scelzi. “She must have `em memorized by now.”

The only thing this ceremony appears to be missing is a Flower Monkey, and I’m guessing Angelle might be able to help us out there, too. 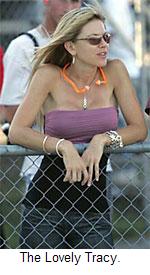 I HATE That Guy: As if we needed any more reasons to envy NHRA Top Fuel driver (and Sirius Speedway favorite) Brandon Bernstein, here's just one more. His girlfriend, Tracy, was captured recently, checking out her man in action at a recent PowerAde Series National event.

How a scrawny little dude like B-Squared can attract the interest of a lovely, intelligent, personable young lady like Tracy is one of the great mysteries of our time. It must be his fetching personality. Or the two-tone hairdo. Either way, attaboy Bernstein!!!

The Numbers Don't Lie: There were 23 Nextel Cup regulars in last weekend's Chicagoland Busch Series race. Twenty-frickken-three! That staggering number prompted Dale Earnhardt Jr., to say that NASCAR should limit the number of races that the so-called "Buschwhackers" can compete in from now on.

“I would like to see some limitations put on the Cup drivers as far as their ability to compete, unless they choose to run for the championship," said Junior. "For the sake of the series -- the longevity and success of the series itself -- I think what's happening right now is slightly detrimental."

For the record, Junior was part of the problem Saturday. He finished fifteenth, two spots ahead of the top-finishing Busch Series regular, Johnny Sauter. 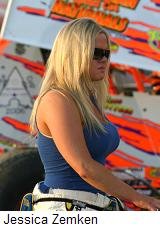 And Finally: In an attempt to set a new Motorsports Soapbox Track Record for "Most Smoking Hot Babes Featured In A Single Entry," we offer this photo of Empire Super Sprint driver Jessica Zemken.

Ms. Zemken is more than just a pretty face (stop it!). She currently stands sixth in ESS points in her rookie season, with a win and six Top-10 finishes to her credit.