Off Weekend? No Thanks... 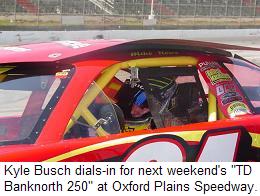 Kenny Schrader and Tony Stewart are well known for racing anything, anytime, anywhere. Kyle Busch seems ready to follow in their well-traveled footsteps.

One day after winning the NASCAR Nextel Cup Series “Lenox Industrial Tools 300” at New Hampshire International Speedway, Busch was an hour or so up the road in Oxford, Maine, Monday, testing a PASS Super Late Model in preparation for the “TD Banknorth 250” on Sunday night, July 30th. Busch tested with the SP2 Motorsports team Monday, and said he is looking forward to running the midsummer classic for the second year in a row.

"I know I'll be in a car that can win the race," said Busch. "The other thing is the fans. They make it a big event, and something I want to be a part of."

A year ago, Busch qualified for the “TD Banknorth 250” by finishing second in a consolation race. He then electrified the crowd with a thrilling run from 28th to the lead in just 77 laps. He didn’t win – finishing sixth behind SP Motorsports teammate and resident Maine racing legend Mike Rowe – but his effort was one of the highlights of the night. Rowe, SP2 co-owner Steve Perry and crewchief Seth Holbrook were all at OPS Monday, hoping to see Busch do even better this time around, with Perry promising, “He's going to be a contender again.”

“Why,” you might ask, “would a busy guy like Shrub give up an off-Sunday to compete in a short track race?”

NASCAR’s Nextel Cup Series hasn’t had a weekend off since Easter, and after next weekend’s hiatus, it’s balls-to-the-wall until the end of the 2006 campaign at Homestead-Miami Speedway in November. Add-in a busy schedule of Busch Series racing, and personal commitments like Big Brother Kurt’s upcoming wedding, and you’ve got a schedule that virtually screams for a little “down time.”

Instead, Kyle’s going to Oxford, along with fellow Nextel Cup contenders Denny Hamlin and J.J. Yeley, and Maine native (and former “TD Banknorth 250” winner) Ricky Craven. He’ll serve as Best Man at Kurt’s wedding on Thursday, fly to Gateway International Raceway in Joliet, Illinois, for Saturday’s Busch Series race, then “try to get some sleep and be (at Oxford) in time to practice Sunday morning at 8 o'clock.”

Simply put, the boy’s a racer.

The way I see it, if Kyle Busch is willing to put forth that kind of effort, the least I can do is be there to see it. I missed very few “TD Banknorth 250s” in my youth, and manned the public address microphone for more than a few. I haven’t made it back to The Plains in a few years, but like Shrub, I’ll be there next weekend to watch childhood heroes like Mike Rowe and Dave Dion take part in one of the most prestigious short track events anywhere on the planet. I’ll even be there for Saturday night’s American-Canadian Tour Late Model race.

I’m not quite Kyle Busch, and I’m certainly no Schrader or Stewart. But a week off?