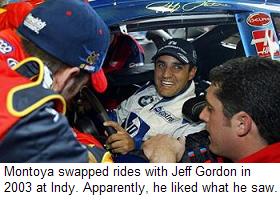 As expected, Juan Pablo Montoya’s shocking jump from Formula One to the NASCAR Nextel Cup racing has drawn more than its share of reaction from around the globe.

The most immediate response came from Montoya’s McLaren-Mercedes team, which announced today that the Columbian will be replaced by test driver Pedro de la Rosa, effective immediately. McLaren CEO Ron Dennis put a friendly spin on the decision, saying the team and Montoya had “mutually agreed for him to step down in the forthcoming races of this year's Formula 1 World Championship. We have agreed that with so many things happening in Juan Pablo's life right now, he should take some time out of the car to prepare professionally and personally for the future."

Montoya also embraced the move, while taking a halfhearted parting shot at the F1 community. “I have enjoyed most of my time in Formula One,” he said, “and I'm grateful for this opportunity to settle my personal life and concentrate on my future career." He also elaborated on his reasons for making the switch, saying, “It's not how many millions you're making. It's a matter of three years down the line, are you going to be excited about what you're doing? Three years from now, when I look at my career, I'm going to be happier here."

The decision to leave Formula One immediately will free Montoya to prepare for next season by running a number of ARCA, Busch, or even Nextel Cup races for new boss Chip Ganassi. Between now and the end of the season in November, he should have ample time to get his feet wet in stock cars, and also gain NASCAR’s approval to drive in the 2007 season-opening Daytona 500.

Reaction to Montoya’s jump has been mixed. On this side of the Atlantic, his signing is seen as a major coup for NASCAR, while on the far side of the pond, Montoya is suddenly being portrayed as a washed-up second stringer, looking to extend his fading career by resorting to a lowly “taxicab” series.

Britain's BBC reacted with its usual arrogance, writing, "As a winner of the prestigious Indy 500 and the Champ Car title, Montoya is already highly regarded in America. NASCAR is hugely popular in the US, and it contains some great drivers. But its staged close finishes and overwhelmingly showbiz approach seem somewhat beneath a driver of Montoya's ability. Doubtless he is being handsomely rewarded for his switch, but it would be surprising if, deep down, Montoya did not share that view. He will leave F1 with a whiff of unrealized potential, his reputation diminished by the way his career there has ended.”

RACER Magazine’s Adam Cooper was typical of the North American media, writing on SPEEDTV.com, “NASCAR is the real winner. Interest from new markets will be immense, at least in the early days. There will also be a lot of folk keen to see JPM cut down to size. What better way of demonstrating the strength of the Nextel Cup and its drivers than having a contemporary Grand Prix star struggling to make an impact?”

Eurosport.com’s James Mulholland took a tougher stance, writing, “Montoya will be more welcomed into NASCAR than he will be missed in Formula One. It is interesting that he should leave motorsport's most glamorous discipline -- where technology is paramount -- for the chassis-smashing NASCAR, where the bumper is more valuable than aerodynamics. The Formula One garage will not exactly miss Montoya.”

RACER Magazine’s Cassio Cortes concurred, writing on SPEEDTV.com, “Montoya has chosen the easy way out. Paddock talk says he could have driven for Williams next season. But the massive task of rebuilding an unsuccessful team almost certainly turned JPM off. Compare that to becoming NASCAR’s hottest driver while being close to his Florida home, and the choice became easy for a man whose dedication was never the match of his talent.”

Even the respected Reuters News Service could not resist taking one final swing at Montoya, writing, “His decision to trade the glamour of Grand Prix for the good ol' boys of U.S. stock car racing made more than a ripple on both sides of the Atlantic. Formula One, with an emphasis on cutting-edge technology but little overtaking, is to the rough and tough, wheel-banging world of NASCAR what steak and champagne are to hotdogs and beer. Montoya's exit will have little impact on the Formula One driver market, where he was already struggling to find a race seat for 2007 in the face of general disinterest.”

If the first 48 hours are a true indication, there is no doubt that Juan Pablo Montoya’s signing represents a major public relations windfall for NASCAR, and for American stock car racing in general.
Posted by Dave Moody at 2:20 PM