Danica To The World: Show Me The Money!

Danica Patrick's father clarified his position today, tempering the comments he made last weekend at Chicagoland Speedway about moving his Indy Car-driving daughter to NASCAR, as soon as next season.

"I'd be a fool not to want her (in NASCAR),” said T.J. Patrick, who also serves as his daughter’s manager. “If you were her father, you would, too. But it's not my decision, and I don't believe she wants to do it. She wants to stay (in the IRL), she wants to run Indy, she wants to win the Indy 500. That's her goal." 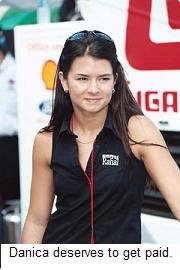 T.J. Patrick spoke to his daughter as she returned from a vacation in Mexico, warning her of the media tempest he had ignited. "She laughed and said, 'What did you do?'" he said. "It's gotten blown out of proportion. No one said a thing when I went with her to the NASCAR race in Phoenix. She talked with Jack Roush, and stuck her head inside Kurt Busch's car. No one said a thing."

Speaking to USA TODAY in Los Angeles, where she will serve as a presenter at tonight’s ESPY Awards, Danica said, "It's important for me to know what's out there, who is interested in me, and who will give me the best chance to win. NASCAR is so big, how can you ignore it? If the right opportunity comes up, you have to look at it.

"As long as we're in this series, we're compensated well for what we do, we're enjoying ourselves and it's safe, then this is where I want to be. As long as that happens, I can see myself racing in IndyCar forever, unless a bigger, better deal comes up and my heart changes."

“I think I'm capable to taking on the challenge (of NASCAR), but it would have to be with the right team, and the right deal. Then, I would consider it. Until then, I'm investigating what the interest level is."

Patrick called her 2006 IRL season at "frustrating and confusing," citing Rahal-Letterman Racing's total of just two top-five finishes among its three drivers. "My priorities haven't changed," she said. "I still want to be a winning IndyCar driver. If I'm given an opportunity to drive for an IndyCar team and win races, I'm going to do it."

If Patrick is serious about switching disciplines, there will never be a better time to do it than now. NASCAR’s driver development pipeline has temporarily run dry, and she could sign a top-notch Busch Series deal almost immediately, with a fast-track plan to advance to the Nextel Cup ranks in 2008. She becomes a free agent on September 10th – after the final race of the IRL season – leaving her time to run the final seven Busch Series races.

Patrick and her father are fully aware of her value to the Indy Racing League. She is the most recognized, most quoted, most valuable driver in the series, and she rightfully expects to be compensated as such. Her estimated IRL salary of $350,000 -- plus a reported 40% of purse and point fund winnings -- is dwarfed by the amount she could make in NASCAR. Even a mid-level Busch Series driver easily eclipses her current Indy Car earnings, and if Rahal-Letterman Racing is unwilling to up the ante, she is left with no choice but to look elsewhere. Tony Stewart faced the same quandary a decade ago, ultimately choosing to leave the Indy Racing League and take his considerable skills to Joe Gibbs Racing and NASCAR.

He is a very rich man -- and a two-time Nextel Cup champion – as a result.

"I hope to be compensated for what I'm doing to help grow everything," said Patrick in May. "I want to help grow the sport. But you can't drive for 30 years, and if I can't get compensated here, I'll look at options."

Patrick’s current stance is one of two things; either a genuine bid to find a place in the world of stock cars, or an ingenious attempt to force some IRL team owner’s hand into paying her what she is worth. My guess is that it’s the latter, but either way, it’s going to be entertaining to watch.
Posted by Dave Moody at 12:20 PM