More Yapping From The "French Poodle" 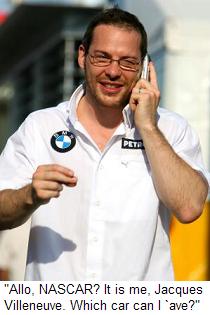 Apparently, Sirius Speedway’s beloved “French Poodle” has his heart firmly set on a second career in stock cars, since he used the venue of last week’s U.S. Grand Prix in Indianapolis to lift his leg on both the Indy Racing League and Champ Car World Series, calling both series’ “tired,” and adding, “you only do that if you have no other choice.”

A couple of points, if I may…

1) I disagree with the premise that Villeneuve’s F1 career is in danger of stalling. As anyone in the Formula One paddock knows, Villeneuve’s career shifted into neutral years ago. The temperamental Frenchman has been resting on his overstuffed laurels ever since.

2) It is my firm belief that Villeneuve would blow his collective brains out after three weeks on the NASCAR Tour. His resume’ features not a single oval-track race -- unless you count snowmobile racing in his native Quebec – and it would take a minimum of two years for the poodle to get up to speed in a stock car. His colossal ego couldn’t possibly hold up that long.

3) Nobody in NASCAR wants him within a thousand miles of their team. In recent seasons, Villeneuve has made a cottage industry out of badmouthing teammates and criticizing his teams. Jacques never makes mistakes, you see, and is a master of deflecting the blame for poor performance away from himself, and onto anyone within splattering range. His contract with BMW-Sauber expires at the end of this year, and they’ll be only too happy to see him go.

4) And finally, I’m tired of hearing washed-up drivers from other series talk about jumping to the NASCAR Nextel Cup circuit, as if NASCAR were some sort of Retirement Home for former racers. Take a look at the track records of former CART, IRL and Champ Car drivers in NASCAR competition. You’ll have to go back to the days of Mario Andretti and A.J. Foyt to find a single winner. As Tony Stewart proved last weekend in IROC competition on the infield road course at Daytona International Speedway, NASCAR’s finest have nothing to learn from those puffed-up sporty car types.

As usual, it appears that the “French Poodle” is barking up the wrong tree.
Posted by Dave Moody at 2:31 PM