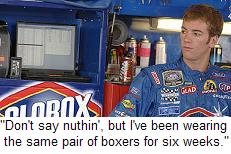 Ya Gotta Love Woody: Busch Series driver (and Sirius Speedway fave) Jon Wood sat down with the boys from NASCAR.com this week, offering his views on a variety of wide-ranging subjects. The entire conversation can be found here, but I was particularly touched by his response to the question, What is your least favorite household chore?

“I would say it would be doing laundry,” replied the Wood Man, “because there is no excitement, so to speak, in washing a bunch of clothes -- just watching clothes getting wet and then dry. We went on a week-long stretch when I hadn't been home, even for a night. So when I got home, rather than do my laundry at my house, I drove two hours so my mom could do it. It was worth the four-hour round trip for me not to have to wash five pairs of jeans and three shirts. Obviously, driving two hours out of the way was my last resort, but I had no choice.”

For the record, Woody is sponsored by Clorox.

Viva Las Vegas: The Las Vegas City Council gave its seal of approval to a proposed Champ Car World Series race in the city's old downtown yesterday, apparently clearing the way for the 2007 street race that has long been rumored to be in the works there.

The proposal approved by the Council yesterday calls for a three-day event on Easter weekend; April 6th through 8th, making the event the 2007 season opener for Champ Car. The proposed circuit is a 2.44-mile, 14-turn, counterclockwise layout, and an official announcement from the sanctioning body is expected sometime in the next few days.

Yesterday’s approval marks the apparent end of a long and interesting process. The rival Indy Racing League originally floated the idea for a street race in Vegas, and until recently, appeared to have the inside track on the event. The concept was eventually shanghaied by a group headed by former Champ Car President Chris Pook, however, with Pook convincing City officials that he and his consortium provided a better chance of success. 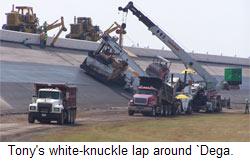 Blistering The Track: Tony Stewart took to the highbanks of Talladega Superspeedway Monday, and despite a not-so-sizzling speed of nine feet per minute, said he liked what he saw. The two-time Nextel Cup champion steered a paving machine through Talladega’s 33-degree banked turns, secured by chains and ropes to keep the hulking apparatus from toppling off the banking.

Stewart came away from the experience impressed with the track, saying, “We're going to be able to get a lot more grip here. It's going to make for a lot of three- and four-wide racing.” He also came away with a great deal of respect for the men and women doing the work, saying, “I feel a whole lot safer going around these turns in my racecar at 190 mph than I did creeping around on that thing.”

I’ve spent a little time standing in the mid-summer Talladega sun over the years, and I can tell you with great surety that laying 500-degree asphalt on a 100-degree day is not my idea of high living.

More Good Numbers For Force: Despite the fact that I inexplicably forgot to tune-in, Monday’s premiere of Driving Force on the A&E Network was a huge success. The show, which chronicles the lives of 13-time NHRA Funny Car champ John Force and his somewhat disfunctional family, generated well in excess of one million impressions in each of its first two airings, giving the network its most watched series premiere since the 2004 premiere of Dog The Bounty Hunter.

The first episode of Driving Force brought in nearly 1.8 million total viewers, a number Force called, “just amazing. We’re grateful to all the people who helped get the show made, and we hope that drag racing fans and everyone else will keep watching us.”

I’ll be watching next week, John, I swear.
Posted by Dave Moody at 9:21 AM