A Sad Split For Herbert and DuPuy 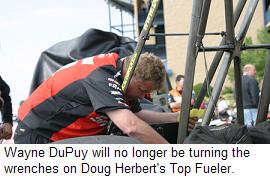 A press release issued by the team late yesterday says Dupuy informed Herbert that he was “overloaded, needed to take a leave of absence, and would not be able to continue as crewchief.”

The veteran tuner suffered severe head injuries in a single-car highway crash in late November, which saw him ejected from his Ford Mustang convertible on Highway 150 near his home in Lincolnton, N.C. Dupuy broke his spine, pelvis, and left eye socket in the crash, and also suffered multiple abrasions. He was transported to Lincolnton County Medical Center, then airlifted to Charlotte (NC) Medical Center and hospitalized in the Intensive Care Trauma Ward, in critical condition. Despite being on a respirator for 34 hours, DuPuy made a miraculous recovery, leaving the hospital in just over a month, and returning to active duty with the team soon after.

The team has struggled this season, however, with “Dougzilla” currently 12th in NHRA PowerAde points; 449 points behind leader Doug Kalitta.

“To say I was shocked would be a huge understatement,” said Herbert yesterday. “I spent time with Wayne after we lost in the first round in Denver, and we were both encouraged with the consistency of the car. We agreed that Seattle would be a great place to turn our season around. I had no clue Wayne was even contemplating a change.

“Since his accident last Thanksgiving, I have stuck by Wayne and done everything I could to help him and his family with the recovery. I wish him the best."

Earlier today, Herbert announced that former crewchief Jim Brissette will return to tune the car, beginning this weekend in Seattle. “I cannot explain how grateful I am right now to Jim Brissette,” said Herbert. “It made the most sense to try and get him back if he wanted to do it, and luckily for me he has accepted the position.”

Brissette served as crewchief for Herbert during all four of his IHRA Top Fuel championships, and also manned the wrenches when Herbert became the second driver in history to break the 300-mph barrier in 1993. He was inducted into the International Drag Racing Hall of Fame earlier this year in Gainesville, Florida.

What happened to prompt DuPuy’s departure? The world may never know. Perhaps the decision was a byproduct of his accident, and injuries that were severe enough to sideline most men permanently. Perhaps DuPuy now lacks the stamina and physical strength to shoulder the demands of an extremely demanding job. Perhaps the near-fatal crash – and his subsequent rehabilitation – caused the veteran tuner to re-evaluate his priorities in life, finding that racing was no longer the end-all and be-all that it once was. Perhaps it was simply a competitive issue; with a driver and tuner agreeing to go their separate ways at the midpoint of a long and surprisingly frustrating season.

No matter what the cause, DuPuy’s resignation from the Herbert team adds a sad final chapter to what appeared to be a Cinderella story in the making.
Posted by Dave Moody at 10:28 AM