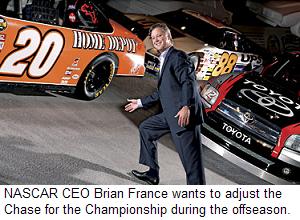 NASCAR Chairman Brian France said last Thursday that some changes may be in store for the 2007 Chase For The Nextel Cup. France sat down with members of the media last Thursday in Daytona Beach, Flroida, and said, “The ideal time for us to make adjustments -- not major changes, but adjustments -- will be in the off-season this year. So you will see that." While offering no concrete thoughts on what might be changed, he did discuss possible revisions to the number of drivers who qualify for the Chase each season, adjustments to the 400-point window that allows drivers to make the Chase without finishing in the Top-10, altering how points are awarded during the final 10 races, and the possibility of changing which tracks host the final 10 Nextel Cup events.

On the off chance that Mr. France might be cruising the internet looking for advice on this topic, I offer a few thoughts for sprucing-up the Chase For The Championship.

1) Award more points to race winners. I would favor this change on a season-long basis, not just in the Chase. Unfortunately, for championship contenders, going to Victory Lane in the final 10 races has become far less of a goal than simply staying out of trouble. Add a cool 20 or 30 points to the winner’s take next season, and we will see those title contenders going for the win, rather than merely cruising along in the top-10. Drivers should not climb out of their cars during the Chase talking about "good points days." They should be talking about letting it all hang out in a last-ditch bid for the checkered flag.

2) Keep the baseline at 10 cars. Personally, I would have no problem expanding the Chase to 12 drivers. Then again, I have no problem with system we’ve worked with the last two seasons. I understand that sponsors want their drivers to be relevant in the final 10 races of the season, but I fear that adding too many teams to the postseason mix will dilute things to the point where The Chase For The Championship becomes a motorized version of the NHL playoffs; where all but the lowliest teams get in.

Bumping the Chase to 14 or 16 cars would add more meat to the playoff stew, but if that many teams make the Chase, what incentive is there for any of us to watch the first 26 races?

3) Bump the 400-Point Barrier. Under the current system, any driver within 400 points of the leader after 26 races (regardless of where he ranks in the standings) makes the Chase. Using that system, nobody outside the Top-10 has ever qualified. Loosening things up a bit – perhaps by giving an invitation to anyone with 500 points of the leader -- would add more players. Again, though, NASCAR doesn’t want to make it too easy to get in.

Given my druthers between a flat, 14-team Chase (no matter how badly the 11th through 14th place teams might suck – and a 500-point cutoff, I think I’ll go for Option Two. At least that way, there will be a minimum standard of performance than all teams must achieve in order to make the dance.

4) Consider changing a couple of tracks in the Chase. The current “Chase For The Championship” host speedways -- New Hampshire, Dover, Kansas, Talladega, Lowe’s, Martinsville, Atlanta, Texas, Phoenix and Homestead-Miami – all do a fine job. Homestead, in particular, has morphed itself from one of the worst tracks on the series to one of the best. They race the heck out of `em at Homestead now, and the south Florida oval deserves to keep it’s spot in the Chase.

If we put it up for a public vote, fans would probably point to New Hampshire and Dover as the weakest links in the Chase. Like Homestead, NHIS has gotten much better competitively in recent years, and there’s nothing wrong with Dover that 100 fewer miles won’t fix. Ditching one (or both) of those races would rob thousands of loyal fans in the northeast of their only chance to see a Chase race, and in my opinion, some consideration must be given to spreading these races around the country so everyone gets to see them.

Does Daytona belong? Maybe, though tiptoeing though two restrictor-plate minefields in the final 10 races might cause a few additional ulcers in the garage area. Should there be a road course on the list? Road racing makes up 5.5% of the total schedule (2 of 36 races), and there are those who would argue that giving the right-turn lovers 10% of the Chase makes perfect sense.

Anyone who knows me knows that I disagree. Violently. But I digress.

Bottom line? I hope that whatever changes Mr. France makes to the Chase will be minor tweaks, not major overhauls. Basically, it ain’t broke, so I see no reason to fix it. A little fine tuning wouldn’t be bad, as long as it’s properly applied.
Posted by Dave Moody at 4:03 PM