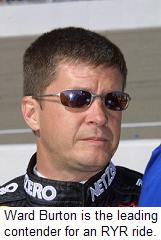 My sources in the NASCAR Nextel Cup garage tell me that after examining a number of other options, UPS has decided to move to Michael Waltrip Racing next season, continuing their relationship with driver Dale Jarrett. That decision will leave Robert Yates Racing in search of both a driver and a sponsor for the 2007 season.

The atmosphere at RYR is reportedly bad, and getting worse. Communication between Jarrett and the team is strained – as might be expected in a “lame duck” situation such as theirs – and a source close to the operation told me this weekend that fingers are beginning to be pointed on both sides of the driver/owner aisle.

In addition, crewchief Slugger Labbe reportedly had words with a member of the #88 team's over-the-wall crew Saturday night, after a botched pitstop cost Jarrett a number of positions on the racetrack. NASCAR officials reportedly were forced to step between Labbe and the unidentified crewmember, in an effort to head-off possible fisticuffs between the two.

There is some good news in the Yates camp, however.

A solid, sixth-place finish by Elliott Sadler in Saturday’s “Pepsi 400” provided a much-needed dose of self-confidence for the entire operation. In addition, veteran Ward Burton continues to rank as the most likely replacement for Jarrett, especially if he is able to bring a sponsor to the negotiating table. Burton told Sirius Speedway Friday that he is in negotiation with at least one potential backer, and is hopeful that a deal can be reached within the next few days.

Finally, I am told that the Yates team will enter into a sort of “merger” with Roush Racing; possibly before the end of this season. If completed, the deal will result in a third Yates Nextel Cup entry in 2007, with Roush dropping to four cars in an effort to comply with NASCAR’s much-discussed ownership cap. The deal will reportedly include a dramatic increase in shared resources and technology between the two Ford teams. Currently, they build engines together through the Roush/Yates engine alliance, but do not share information on chassis or aerodynamic technology.