There’s change in the wind at Robert Yates Racing. 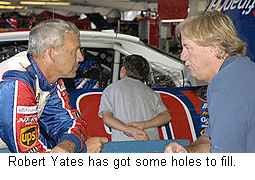 The struggling Nextel Cup team released veteran crewchiefs Tommy Baldwin and Raymond “Slugger” Labbe Monday, completing a management purge that saw Team Manager Eddie D'Hondt handed his walking papers on May 23rd. Butch Hylton will take over the #88 team for the time being, while Cully Barraclough oversees the #38 team. Don’t expect to see either gentleman named to the full-time crewchief’s role, however, after co-owner Doug Yates made it clear last week that a bit of modernization is in order.

Yates said he and his father have been guilty of clinging to their old-fashioned ways, resisting the influx of engineering to the sport in favor of the more familiar mechanic-based way of doing things. Most top Nextel Cup teams have 15-20 engineers on staff, while Robert Yates Racing reportedly has just six. Yates credited much of the success of the Roush-Yates engine partnership to his decision to hire the best engineers available, lock them in a room and wait for results. The same, he said, needs to be done with the racecars.

Yates called Baldwin and Labbe “good racing guys,” but not necessarily the best men to solve the team’s problems. As a result, the two crewchiefs are gone; Baldwin heading back to Bill Davis Racing, where he was crewchief from 1998 to 2002. Labbe is reportedly examining his options for future employment, and will almost certainly resurface with another top NASCAR team in the near future. 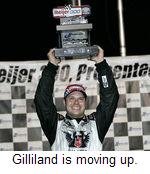 While change is underway in the engine and fabrication shops, there are still plenty of questions about RYR’s 2007 driver lineup. Robert Yates announced that David Gilliland will drive his #90 Busch Series Ford this weekend at O'Reilly Raceway Park at Indianapolis; substituting for Stephen Leicht, who will attempt to qualify for the Allstate 400 at the Brickyard. In recent weeks, Gilliland and Leicht have been widely rumored to be in line for Yates' two Nextel Cup Fords next season, replacing Dale Jarrett and Elliott Sadler. Doug Yates said of Gilliland, "He's a hot item. How can you not look at him? Whoever gets him will be a lucky organization."

My sources say that both Citifinancial and M&M's have expressed a preference for fresh faces in 2007, paving the way for Leicht and Gilliland. While Gilliland has reportedly received offers from Yates, Jack Roush and Richard Childress, the 30-year old driver is keen to jump straight to Nextel Cup in 2007, believing his age does not allow him the luxury of a 1-2 year internship in the Busch Series.

Gilliland’s former Busch Series team -- Clay Andrews Racing – added another level of certainty to the story Monday, announcing that it is closing its doors, effective immediately. Team-owner Clay Andrews said, “We put our heart, soul and resources into David Gilliland. Personally and financially, we do not feel it is best to move forward at this time."

A Leight-Gilliland lineup certainly seems to be in the cards at Robert Yates Racing next season, and Yates said there is a chance for the team to expand to three cars, if Ward Burton comes up with a sponsor. In his words, “If Ward walked in with a sponsor today we'd say, 'Ward, you've got the ride.’”
Posted by Dave Moody at 5:39 PM