Barney Hall, Maurice Petty To Be Inducted Into NMPA Hall Of Fame

One of the most successful engine builders in the history of NASCAR, and a legendary MRN Radio broadcaster make up the National Motorsports Press Association’s Hall of Fame Class of 2007.

Situated high above the racetrack, MRN Radio’s Barney Hall has been relaying the action of NASCAR racing to fans for nearly five decades. Maurice Petty, head engine builder for Petty Enterprises for more than 30 years, helped guide brother Richard to 198 of a series-record 200 career victories.

Halls’ distinctive voice is one of the most recognizable in all of motorsports, and he ranks as one of the most respected figures in the NASCAR Nextel Cup Series garage. He got his start working for a tiny radio station in his hometown of Elkin, N.C., in 1958, before working as public address announcer at what was then Bristol Motor Speedway. Within two years, he was hired by Bill France, Sr., as an announcer for what would later become MRN; the Motor Racing Network. Today, at 74 years young, Hall continues to be a fixture for the network, and an inspiration for us “young bucks” fortunate enough to work with and learn from him. 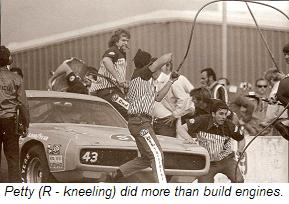 Petty’s mechanical wizardry led to seven Cup Series championships, seven Daytona 500 victories and one incredible stretch that saw the Petty Enterprises team post 27 wins – including 10 in a row – during the 1967 season. In addition to his engine-building skills, Petty also made 26 starts as a driver at the Cup level, earning seven top-five and 16 top-10 finishes between 1960 and 1964. His best career finish was a third-place showing in 1961 at Spartanburg, S.C.

“I’ve been working on retirement for about 10 years,” said the 67-year old Petty this week. “But there really isn’t one date when I ‘officially’ retired. I guess when I turned 62 and started getting my rocking chair money.”

He stepped away from the sport in 1985, but continued to stay involved, working with Dodge and helping prepare motors for the manufacturer when it returned to the sport. Diagnosed with polio as a child, Petty says the disease “has finally got me to where I can’t walk. I stumble around with a walker a little bit, but get around mostly with the help of scooters. I finally used up all the good muscles I had, I guess.

“But you know what? I enjoyed every minute of it. I wouldn’t trade it for anything. I don’t envy these boys that are out there right now. I think they have way too much pressure. We had a lot more flexibility. I always felt like the harder we worked -- and more innovative we were -- the further ahead you could get. But I don’t know about now.”

Barney Hall and Maurice Petty will be officially inducted into the NMPA Hall of Fame in January of 2007.
Posted by Dave Moody at 11:08 AM