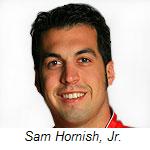 He will begin by running at Phoenix and Homestead-Miami Speedways in the final two weeks of this season, before sharing the No. 39 Penske Racing South Dodge with Kurt Busch and Ryan Newman in 2007. Hornish said he still plans to compete full-time in the IndyCar series, adding, "I grew up wanting to be an Indy-car driver, but I have watched hundreds of NASCAR races. I always thought this would be something I'd like to try, and I feel this is the right time in my career. I still have a lot of questions in my mind as to how it's going to go."

Troxell On The Move: Evan Knoll confirmed yesterday that he will move Melanie Troxel and her Skull Shine-sponsored NHRA Top Fuel team to the Lucas Oil stables in 2007, running Troxel as a teammate to Morgan Lucas under the guidance of crewchief Richard Hogan. Knoll said of the Lucas team, "They've proven what they're capable of, and the fact that we're keeping the entire team intact should make for a very smooth transition."

Troxel's current team owner, Don Schumacher, said last week that he has Troxel under contract to drive for him in 2007, but, "wouldn't stand in her way if she wanted to go." Knoll also said that an announcement is forthcoming on the future of Mike Ashley's Torco Race Fuels Dodge Charger Funny Car.

Chevrolet Cutting (Bow)Ties: Chevrolet will end its full-time factory sponsorship of the Craftsman Truck Series next season, but will continue to provide technical and engineering support to teams.

GM Racing’s Truck Series Manager, Dayne Pierantoni said, "Things are tough in Detroit, and there is some cost containment in place. We are going to have some changes in the way we support our teams next year."

The team most dramatically affected by the decision will be Morgan-Dollar Motorsports, which has received factory backing for its No. 85 Chevrolet and driver Dennis Setzer, as well as its No. 46 entry, driven by a number of Nextel Cup Series drivers. Morgan-Dollar has already begun searching for new sponsorship.
Posted by Dave Moody at 12:08 PM