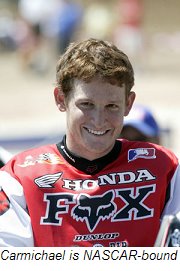 One of the top two-wheeled racers of all time is coming to NASCAR.

Ricky Carmichael announced today that he will join the MB2 Motorsports operation next season, after agreeing to a multi-year contract, beginning in 2007. The 15-time AMA national champion will compete in a developmental program of approximately 15 events in Late Model Stock cars, ARCA and possibly the NASCAR Craftsman Truck Series, with plans to accelerate that program in 2008.

The 26-year old is also planning to run an abbreviated Supercross and motocross schedule next year with Team Makita Suzuki Racing. Carmichael announced earlier in the year that 2006 would be his final full-time season in Supercross and motocross. Since joining the AMA Motocross circuit full time in 1997, he has never lost an outdoor championship; with three straight 125cc titles, followed by seven consecutive 250cc crowns. His record also includes five indoor AMA Supercross championships.
Posted by Dave Moody at 2:27 PM