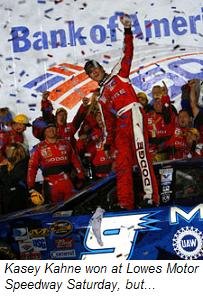 You would think it's impossible to fly under the radar while leading the NASCAR Nextel Cup points. But with five races remaining until the 2006 champion is crowned at Homestead-Miami Speedway, that’s exactly what Jeff Burton is doing.

While so many around him fold under the pressure, NASCAR's version of Old Man River just keeps rolling along. While others find ways to turn certain victory into final-lap defeat, Burton brings home one Top-10 finish after another; bringing his Cingular Wireless Chevrolet back alive four times in five Chase races.

One after another, his championship rivals climbed from their mounts with smiles on their faces Saturday night; Kasey Kahne in Victory Lane, with Jimmie Johnson, Dale Earnhardt’ Jr., and Kyle Busch not far behind. Those smiles disappeared with a single glance at the Lowes Motor Speedway scoring pylon, a glance that revealed Burton in third place.

"When you look at what he and Kevin Harvick have done from the middle of the season on, you knew that RCR was going to be a threat for the title,” said Johnson Saturday.”I'm only 146 out, but I only made up 10 points tonight.”

Kahne’s car owner, Ray Evernham, sang a similar tune, saying, "If they don't make mistakes, the likelihood of someone catching them is not going to happen.”

“We didn't get to gain on The Iceman,” lamented Earnhardt. “They are there every week, doing a great job. The guy knows how to win championships. He has an idea what it takes.” NASCAR’s most popular driver even allowed how it might not be so bad to lose the title to Burton, saying, “You have to pull for them a little bit to win the championship.”

Have Earnhardt, Johnson, Evernham and their fellow title contenders run-up the white flag of defeat with five races still remaining? Not a chance. Their comments Saturday night were sincere to a point, but they also contained a hidden agenda. Like a High School football coach singing the praises of next weeks’ winless opponent, the rest of the Nextel Cup garage is searching for a way to throw Burton and the Richard Childress Racing juggernaut off its game right now.

Maybe a little overconfidence will do the trick.

Burton said he doubts he’s the target of psychological warfare. But either way, he doesn’t seem overly concerned. "I'm not smart enough to take it like that,” he said. “Sports are a funny way to make a living. If somebody says you're not (running) worth a crap, everybody thinks they're trying to psych you out. If somebody says you're doing really good, they think they're trying to psych you out.”

Instead of analyzing all the pitroad chit-chat, Burton and his team will simply go back to work, working on their short-track program for Martinsville this weekend. For the record, Burton’s record on the bullrings is second-to-none, offering the Cingular Wireless bunch an opportunity to drive another nail in everyone else’s championship coffins.

“The points system punishes you more for dropping out than it rewards you for doing good,” warned Evernham. “That's what they've got to watch. He hasn't had his bad race."

And the way things look right now, he may not.
Posted by Dave Moody at 1:16 PM