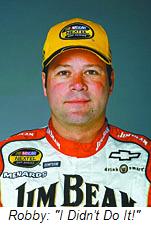 Despite videotape footage that appears to show a piece of roll bar padding coming out of Robby Gordon’s Chevrolet 35 laps from the finish of yesterday’s race at Atlanta Motor Speedway, NASCAR spokesmen say they do not anticipate any penalties to be assessed.

NASCAR threw a caution flag on lap 291 of the race, ending championship contender Jeff Burton’s hopes of getting back on the lead lap, and prompting angry comments from Burton after the race. “We were going to be OK, and then they threw a caution because of a roll bar pad," said Burton. "NASCAR should stop every car on pit road and check for roll bar pads, and whoever threw it out should be fined 185 points and $100,000 because it was a huge impact on the race. It is starting to happen too often, and NASCAR gets on everybody when it happens. Well, they should find out who did it and penalize them.''

Nextel Cup Series Director John Darby said his inspectors were ordered to inspect every car for missing roll bar padding as they were loaded into the haulers, but cautioned that he did not expect to apprehend a culprit, saying, “We'll be going through every car as they load them, but that's not to say it might not have been under somebody's seat."

NASCAR ruled the NBC videotape “inconclusive,” with spokesman Herb Branham adding, “If (Gordon) did it, he did it. But looking at the video, it was inconclusive to the point we could not react to it.”

Gordon received a free pass back onto the lead lap during the caution, and ended up finishing tenth. After viewing the footage, Gordon said, “I definitely did not throw anything out of the window. It looks like it came out from under the back of the car. Maybe I ran over something, I don’t know.”

You can check out the footage and hear Gordon's comments by clicking HERE.
Posted by Dave Moody at 12:22 PM