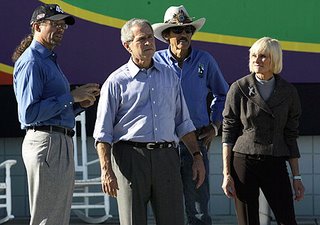 The Commander-In-Chief's visit included a fishing trip to the “Bass Pro Shop Catch, Kiss & Release Marina,” with the President joining campers Maddie Lee and Hank Grissom. Campers also challenged the President to test his skills on a NASCAR simulator. The "World's Most Powerful Ture Changer" also took part in a mock NASCAR-style pitstop.

The President toured “Adams Race Shop” -- a 9,000-square foot building in the shape of a racecar – where he was met by Victory Junction campers Paul Rader, Will "Cheese" Kwapil and Morgan Sagerman, as well as drivers Michael Waltrip and Jimmie Johnson. The final stop of the day was at the camp’s dining hall, where the President took a photo with the entire staff. Pattie Petty said of the visit, “I can't thank the President enough for taking the time to come visit Victory Junction. I hope this makes every child and parent that has visited the camp very proud.”
Posted by Dave Moody at 10:31 AM