Time To Stop The Insanity 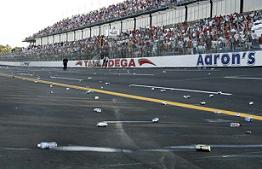 Dale Earnhardt, Jr., may or may not be out of the 2006 NASCAR Nextel Cup championship chase. But either way, there's one important task still at hand.

In the aftermath of Sunday's last-lap crash involving Earnhardt, Jimmie Johnson and eventual winner Brian Vickers, fans at Talladega Superspeedway expressed their disapproval by showering the racetrack (and anything else within range) with debris. Beer cans, soda cans, seat cushions and all manner of debris poured down like rain, as members of Earnhardt Nation protested the unhappy outcome of the race.

At least one child was reportedly injured by a thrown object, and numerous other fans, drivers, track workers and NASCAR officials were sent scurrying for cover in the face of the barrage. It was at least the third incident of this type in recent years, and in my opinion, that's three times too many.

In April of 2004 -- also at Talladega -- NASCAR awarded Jeff Gordon the win after replay cameras showed the Dupont Chevrolet in front of Earnhardt as the caution flag flew on the final lap. Fans reacted with a rain of terror that was as dangerous as it was mindless. Amazingly, Earnhardt endorsed the barrage, saying, "Now my fans can finally have their chance to voice their opinion on how chickenshit that decision was."

"You shouldn't do it," admitted Earnhardt, "(but) in a way, I look at it as a pure form of expression, which is really rare in sports."

Junior was wrong about that. What happened at Talladega that day was nothing short of hooliganism; the sort of mindless, gang mentality that should be confined to European soccer pitches, not NASCAR speedways. What happened that day -- and at least twice since -- tarnished the image of this sport, and reinforced the outdated stereotypes we've been working for decades to shed.

To many people around the nation, NASCAR fans are nothing more than tabacka-chewin', beer-swillin', overall-wearin', dentally impaired yahoos. What happened Sunday at Talladega does nothing to dispell those myths. In fact, it reinforces them. NASCAR can do little to stop the insanity. Local law enforcement is relatively powerless, as well, since arresting a few dozen would-be Roger Clemens' cannot possibly stem the tide of thousands of airborne Budweisers.

There is only one person who can put an end to this disturbing trend, and his name is Dale Earnhardt, Jr.

Hopefully, America's most popular racecar driver will come forth in the next few days and say what he should have said in April of 2004. Hopefully, he will condemn the conduct of everyone involved in Sunday's embarrassing outburst, stating in no uncertain terms that he wants no part of any "fan" who acts in that way. Hopefully, he will retract what some people obviously considered his endorsement of similar conduct in the past, and make it clear that if you plan to act that way in the future, you need to take off that red #8 T-shirt and find something else to do with your Sunday afternoons.

Jimmie Johnson -- whose fans also had reason to be upset Sunday -- said it perfectly when he told reporters, "We've got a huge fan base...that is going to express their feelings. Going to events and booing other teams is just a part of that. All I would ask is that people do it within reason, without jeopardizing other people's safety. I understand that a young child was injured by something that was thrown, and there's no call for that. Boo all you want to, express your displeasure, fill all the chat rooms with your comments, but injuring people is over the line."

Junior, the racing world needs to hear the same from you, and the sooner the better. Stop the insanity, before it's too late.
Posted by Dave Moody at 11:41 AM