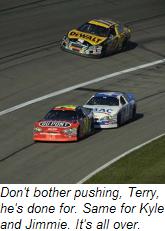 It's Just Not Meant To Be: In the aftermath of Sunday’s karma-rich “Banquet 400” at Kansas Speedway, I have come to a couple of conclusions.

First, Jimmie Johnson and Hendrick Motorsports are destined to lose the Nextel Cup, again. Johnson had Sunday’s race won. He was cruising along with a healthy lead, needing only to make a routine, splash-and-go pitstop in the final laps to claim victory. A win in Kansas would have put him back within arm’s reach of the title, but instead, he watched as Kasey Kahne’s bizarre pit road spin – something that never happens at Kansas – aborted his first attempted stop. He then got busted for speeding on his second try, turning him from “sure-winner” to “14th-place finisher” in the blink of an eye. Johnson is now 165 points behind, in eighth place. Worse yet, the Gods themselves seem to be frowning up him and his team.

The situation is equally bleak for Hendrick Motorsports teammates Jeff Gordon and Kyle Busch. Gordon had a top-three finish in the palm of his hand Sunday, only to have a camshaft failure cause his fuel pump to cease operating with 29 laps to go, sending him behind the wall. The debacle dropped him four positions to sixth in the title chase, and caused him to publicly second-guess the string of mechanical failures that has plagued the Hendrick team during the Chase. Busch, meanwhile, has had luck worse than the Buffalo Bills and Chicago Cubs combined, making his championship drive fall flatter than a cow pie on a rainy day.

Second, Jeff Burton is the chosen one.

Ryan Newman flat-out wrecked in front of him in the early laps Sunday, only to have Burton two-foot the brakes and somehow avoid making contact. Ninety-nine times out of 100, Burton piles into Newman and finishes 42nd on the day, putting his title dreams in serious jeopardy. But Sunday, Burton parted the waters like Charlton Heston, slipping past Newman’s spinning Dodge without so much as a crease, en route to a fifth-place finish that boosted his championship lead to 60 points over Denny Hamlin.

Burton fans, there is no reason to sweat Talladega this week. Your driver has been annointed from on high, and no evil can befall him.

Kansas Robbery Update: Two men with lengthy criminal records have been charged in connection with Sunday’s robbery and shootout at the Kansas Speedway. The incident left an off-duty police detective critically injured, and the men were jailed early Monday on suspicion of aggravated battery of a police officer and aggravated robbery.

Police are not releasing many details of the incident, which occurred at about 8 p.m. Sunday, after most of the crowd had left. The men attempted to rob a secure building known as “the bank,” where vendors take the day's receipts. Police would not say whether the men were employed at the track, but said they were believed to have passed through restricted areas. The off-duty detective exchanged fire with the suspects, who then fled on foot before being caught.

One suspect has a record dating back to 1971, with convictions for first-degree robbery, felonious assault, bank robbery, conspiracy to distribute a controlled substance and being a felon in possession of a firearm. His alleged accomplice was convicted in the late 1970s of using a firearm to commit a felony, and carrying a concealed weapon. Doctors upgraded the condition of the injured officer to fair condition yesterday. Police spokesman Capt. James Brown said, "She is doing better. There will be some more medical procedures that she will have to undertake this week, so our prayers are with her, and we hope she gets through that with no problems." She is awake, and has been contributing to the investigation.

For a video update on the story, and the injured officer’s condition, CLICK HERE.
Posted by Dave Moody at 12:12 PM