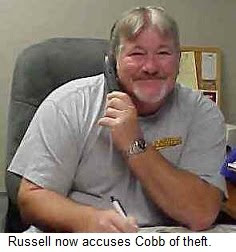 The battle between Jennifer Jo Cobb and her former car owner, 2nd Chance Motorsports owner Rick Russell, escalated to a new level today, with news that Russell has filed a police report alleging that Cobb and her crewchief, Steve Kuykendall, stole $16,000 in race parts from his Mooresville, N.C. facility.

Russell filed larceny charges against the pair, and claimed police found about half of the missing parts Sunday in a storage facility used by Cobb. Russell told ESPN.com, "There were containers of parts that came right off (my) shelves with the prices still marked on them. Both her and her crew chief said they didn't know how it got there.”

Cobb said the storage unit belongs to Russell, saying they had his permission to move the parts there in an attempt to clear space in his race shop. She denied being involved in any theft, claiming she told Russell Sunday to take all the parts that belonged to him.
Posted by Dave Moody at 10:41 AM