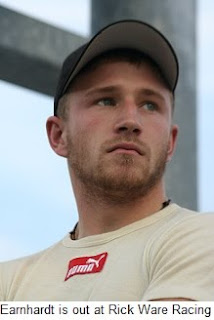 Team owner Rick Ware said the decision came when several team owners reported being approached by Earnhardt about driving for them and bringing the team’s sponsor, Fuel Doctor, along with him. “(Earnhardt) and his management company (have) been shopping around for another team, (saying) that sponsorship was coming with them,” said Ware. “This aggressive move… has resulted in a breach of contract. Rick Ware Racing will now put the focus on finding a driver for the #1 Fuel Doctor Chevy at Martinsville and for the rest of the season.”

Earnhardt released a statement admitting that he shopped around for a new team, but insisted he did so only after Fuel Doctor informed RWR that it would seek alternative marketing venues. "To read that release was very upsetting and I’m disappointed to hear the inflammatory and disparaging statements personally made by Rick Ware about me and my company," said Earnhardt. "The facts support that we did reach out to other race teams after the sponsor notified Rick Ware and my group that they were pursuing alternative marketing venues.

“Rick advised us that he would only race me in Martinsville providing we signed a release to allow him out of his contract with (my management company), Jeffrey Earnhardt, Inc.” said Earnhardt. "That release never arrived and we notified him in writing on Monday that we expected to drive the No. 1 truck in Martinsville, in accordance with our contract. To suggest anything other than these facts does not reflect the truth and is unfair to the fans and us.

"We are extremely thankful for Fuel Doctor's support over the past two years and will avoid compromising our progress this season by giving credence to the misinformation coming from RWR," he said. "This news speeds up the need to find an alternative ride, and we look forward to continuing our run for Rookie of the Year with a new team.”

Ware called the parting with Earnhardt “disheartening,” adding “all the effort, time and money spent on Jeffrey have been for nothing. But we have been given no choice but to look for another driver. … It’s a disappointment that I have not felt in this sport before.”

There is no word on whether Earnhardt will race this weekend at Martinsville Speedway, and if so, for whom.
Posted by Dave Moody at 4:55 PM