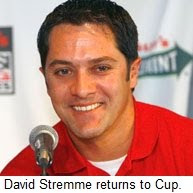 Sirius NASCAR Radio's Sirius Speedway with Dave Moody has learned that 2003 NASCAR Sprint Cup Series Rookie of the Year David Stremme will return to the series at Richmond International Raceway later this month with the new Inception Motorsports team.

Stremme will drive the #30 Inception Chevrolet in a select schedule of events this season, beginning with the Crown Royal Presents the Matthew and Daniel Hansen 400 at Richmond on April 30, with a goal of running the full 2012 Sprint Cup schedule.

Veterans Steve Lane and Gus Larkin will be a part of the new operation, with Lane serving as crew chief and Larkin -- who most recently served as the Team Manager at JR Motorsports -– managing managing the team’s day-to-day business. Inception Motorsports will be based in Mooresville, N.C., and will be privately funded through the Inception Investment Group.

“The plan is solid,” said Stremme, who has a combined total of 20 Top-5 and 52 Top-10 finishes in the Sprint Cup and Nationwide Series driving for Chip Ganassi Racing, Penske Racing, Rusty Wallace Racing and Braun Racing. “We’re going to pick our shots this season, earn respect and establish ourselves as a competitive race team. Then we’ll make a points run in 2012.

“The exciting thing about Inception is that everyone involved is experienced in the sport,” he said. “I think this will be a good deal. We all share a common belief system about how to build and operate a successful race team.”
Posted by Dave Moody at 2:27 PM