Just a few months ago, Robby Gordon and Kevin Conway were teammates, working together to help Conway win the 2010 NASCAR sprint Cup Series Rookie of the Year title. Today, that relationship is – quite literally – battered and bruised beyond repair, in the aftermath of a physical confrontation in the Las Vegas Motor Speedway garage last Friday that prompted Conway to file a police report alleging battery and left Gordon on NASCAR probation for the remainder of the year.

Exactly what happened depends on who’s doing the talking. Conway called the incident “a physical attack,” telling police he was punched at least twice by Gordon. Gordon classified it as a “heated verbal exchange” and has denied throwing any punches. NASCAR Vice President of Competition Robin Pemberton termed it a "heated discussion," and the few witnesses to the incident say there was a preponderance of grabbing, wrestling, rolling on the ground and foul language, with accounts differing as to whether any actual punches were thrown.

Early this week, Conway released a written statement that was part explanation, part accusation and part awkward, double-entendre plug for his sponsor, ExtenZe. “I don’t mind stiff competition,” said Conway, “but I want to make sure the hard facts are told.” 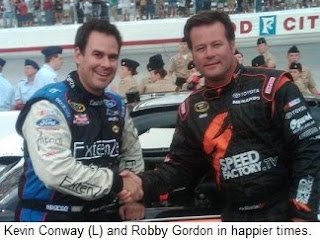 He accused Gordon of an unprovoked “ambush…in the garage area at Las Vegas Motor Speedway,” claiming that Gordon confronted his current car owner, Joe Nemechek earlier that day, shoving him and threatening to assault Conway. “It’s very unfortunate that he chose to physically attack me to address his rage,” said Conway. “Our fans, sponsors and NASCAR expect and deserve more… than this bullish, illegal behavior.”

Gordon soon issued a statement of his own, saying the incident stemmed from an ongoing dispute over sponsorship money he claims he is owed by ExtenZe and its parent company, Biotab Neutraceuticals. Gordon has sued Biotab for $690,000 he claims he is owed for six races Conway drove in his cars at the end of last season. Biotab claims Gordon violated their contract by replacing Conway in the car for one race in an effort to maintain the team’s Top 35 status; a move Gordon says the company approved. Conway subsequently sued Gordon for $27,000; part of his 2010 Rookie of the Year earnings.

“Unfortunately, this is not the first time that Conway and his sponsor have failed to honor their financial obligations to NASCAR teams,” said Gordon yesterday, alluding to a 2010 lawsuit filed by Front Row Motorsports accusing Biotab of failing to pay its sponsorship tab. He called the Las Vegas confrontation, “the kind of thing that is normally handled between the involved parties” rather than involving the police, adding, “It is unfortunate that Conway has chosen to use this insignificant event as a means of attracting publicity to himself. Conway would better serve the interests of our sport and the fans by making sure that he meets his personal financial obligations to our teams before engaging in publicity seeking behavior of this type.

"It's simple," said Gordon of the dispute. "I'll pay (Conway) his money when he pays me my money."

A spokesperson for the Las Vegas Police Department confirmed that Conway filed a misdemeanor battery complaint against Gordon, saying that no arrests were made because officers did not witness the skirmish. No summons’ were issued, but the department did interview witnesses in anticipation of turning the case over to the Clark County District Attorney’s office for possible prosecution.
Posted by Dave Moody at 9:47 AM