Football icon Ken “Snake” Stabler will serve as Grand Marshall for the 2011 season opener at Rick Crawford's new Mobile International Speedway Saturday night. The former University of Alabama and Oakland Raider standout will drop the green flag for the Miller Lite 100 as Crawford makes his promotional debut at his home track.

"Ken is a long time racing supporter, and at one time I drove a Late Model for the Snake," said Crawford. "We’ve remained friends over the years, and I’m excited that he’s going to be at the Speedway for my first race," 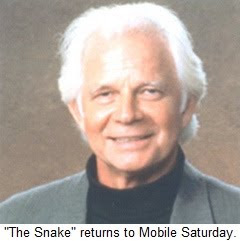 After playing his college ball for legendary Crimson Tide coach Paul "Bear" Bryant, Stabler enjoyed a lengthy and successful career in the National Football League, becoming the league's Most Valuable Player in 1974 and leading the Raiders to a win in Super Bowl XI. Since retiring from football, Stabler’s Legend Cellars has partnered with Anderson Estate Wines of Santiago Chile to produce the “12” Championship Collection.

“You can feel the positive energy Rick is bringing to the track," said Stabler. "It’s good for the Speedway, it’s good for racing and it’s a huge plus for South Alabama."

In addition to Stabler's appearance as Grand Marshall, Crawford has announced that “The Godfather of Motorsports,” Dave Moody, will man the public address microphone for Saturday night's event. A multi-time National Motorsports Press Association and Associated Press Award winner in both radio and print, Moody began his racing career as a short-track public address announcer in his native Vermont in 1979, under the guidance of his mentor, CBS-TV motorsports pioneer Ken Squier. Since then, he has announced at nearly 100 speedways throughout the United States, Canada and Mexico.

“I have listened to Crawford talk about Mobile International Speedway for years," said Moody. "When our schedules lined up so I could come to Mobile and share the announcing duties on his first night as a promoter, it was an opportunity I couldn’t pass up."

“Having `The Godfather' join us for opening night is really special," said Crawford. "We have a world-class show on the racetrack, and now we’ve added the Motor Racing Network's Number One corner man to call the play by play.”

Moody will join longtime trackside announcer Derek ”Kane” Long on Saturday nights broadcast team,caliing the action for the Miller Lite Super Late Model Series, the Island Motors II Bombers, Bob's Speed Shop Sportsmen and Alabama Pipe and Supply Modifieds. Admission is $15 for adults, $14 for military, seniors and policemen, $5 for children 6-11 and ages 5-and-under are free when accompanied by an adult.