Sirius NASCAR Radio's Sirius Speedway with Dave Moody has learned that ThorSport Racing has signed 2010 ARCA Series Rookie of the Year Dakoda Armstrong to pilot a third Chevrolet Silverado in the NASCAR Camping World Truck Series. ThorSport, the longest-tenured active NCWTS team, will campaign a new, #98 Chevy in a select number of races this season with 19-year old Armstrong at the controls, in hope of capturing the Sunoco Rookie of the Year award. ThorSport claimed rookie honors with Willie Allen in 2007 and Johnny Sauter in 2009. A full season is planned with Armstrong in 2012. 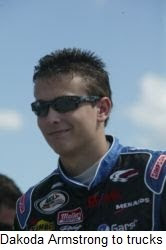 Armstrong claimed two wins in the 2010 ARCA Racing Series en route to that circuit’s Rookie of the Year title. He also claimed the checkered flag in one of the circuit’s biggest events at Talladega Superspeedway. He will team with veteran drivers Matt Crafton and Johnny Sauter, both of whom are off to strong starts to the 2011 campaign.

Armstrong Farms – the Armstrong family business for more than four generations, will provide sponsorship. It is one of the largest corn producers in the Midwest for ethanol production, providing 700,000 bushels each year to Cardinal Ethanol and Anderson Ethanol; the equivalent of approximately 1.9 million gallons of ethanol.

“We’re excited to add Dakoda Armstrong… to our growing NASCAR Camping World Truck Series program in 2011,” said Matt LaNeve, Vice President of Motorsports Partnerships at ThorSport Racing. “He is an inspirational young driver who has had a lot of success in every series he’s competed in, and he’s part of the next generation of NASCAR drivers. The fact that he’s also one of many corn growers who are helping to feed and fuel America… is a compelling NASCAR story.”

Armstrong made his racing debut in 1998 driving midget cars, accumulating armfuls of trophies that include the 1998 WKA National Championship, 2000 & 2001 Nascart Championships; 2004 Kenyon Midget Championship and the 2007 PRI Mopar Midget Championship; He racked up three USAC Midget Championship wins in 2008, and was a top competitor in the former Hooters Pro Cup Series in its final season. He joined Penske Racing as a developmental driver in 2009, making his debut in the ARCA Racing Series with wins at both Talladega and Kentucky Speedway.

“Driving for such a strong team with a long history in this series is an unbelievable opportunity for me,” said Armstrong. “I grew up building my own midget cars on our farm, and it was always my dream to make it to NASCAR to drive for an organization like ThorSport Racing. This team has proven that it can put trucks on the track to race consistently for wins. I’m also excited to be able to shed more light on what farmers like my family are doing to help Americans become more energy independent. Our corn is used to produce ethanol, which provides us a renewable fuel that reduces emissions and creates jobs right here at home. I’m very proud of that.”

Armstrong is tentatively set to make his Truck Series debut at Iowa Speedway in July. More details will be announced at a later date.
Posted by Dave Moody at 11:56 AM