Raikkonen To NASCAR? And He's Bringing Foster Gillett With Him! 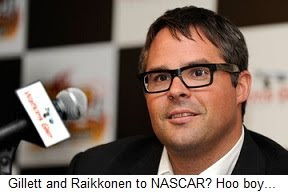 Multiple published reports today say that 2007 Formula One champion Kimi Raikkonen will complete in a limited schedule of events on the NASCAR Camping World Truck Series this season with a new team owned in part by Foster Gillett.

Gillett is the son of former Richard Petty Motorsports majority owner George Gillett, who walked away from the team late last season, leaving it in financial ruin before being bought out by former partner Richard Petty and a pair of partners.

Raikkonen -- a former World Driving Champion in F1 -- has raced on the World Rally Championship circuit since losing his Formula One seat, and will reportedly continue with his rally career while racing a limited schedule in NASCAR. The Finnish Turun Sanomat newspaper reports that Gillett will be “a major partner” in Raikkonen's new ICE1 Racing Team.

Commenting on the report, former Gillett Evernham Motorsports minority partner Ray Evernham quipped, "Kimi Raikkonen must not be as smart as people say he is.

"I honestly can't believe it will happen," added Evernham, who sold a majority interest in his team to George Gillett and still claims to be owed millions of dollars. "I can't see how (the team) will be able to get parts and pieces. I can't imagine anyone doing business with (Gillett), considering the past history.

"That's just my opinion," he said, "but the facts are there. There are a lot of people out there who are still owed a lot of money. It's a joke."

Evernham said he makes "absolutely no distinction" between Gillett the father and Gillett the son, saying both men "sat in all the meetings and made the decisions. One is as responsible as the other. I don't see a difference between them, and I can't see how anyone else would, either."
Posted by Dave Moody at 5:31 PM