NASCAR Can Do Without Foster Gillett

It's difficult to tell why so many seem so consumed with the idea of Kimi Raikkonen trying his hand at NASCAR. The 2007 Formula One driving champion has announced plans to tackle the NASCAR Camping World Truck Series beginning next month at Charlotte Motor Speedway, driving a limited schedule of events for the new ICE1 Racing Team. His self-professed plans call for a quick progression to Sprint Cup competition by the end of the year, though that itinerary could be pushed back once he actually straps into a NASCAR machine for the first time.

Juan Pablo Montoya, Sam Hornish, Jr., Dario Franchitti, Danica Patrick, Nelson Piquet, Jr, and Narain Karthiheyan have made similar transitions to the stock car world in recent seasons with wildly varying levels of success, making one wonder what intrigue remains in the well-worn "Open Wheel Star Attempts Transition To NASCAR" headline? After winning the 2007 F1 title with Ferrari -- and who couldn't win for Ferrari in those days -- "The Iceman" soon faded from the headlines, eventually losing his seat and turning his competitive attention to the World Rally Championship. He currently languishes ninth in the WRC standings, having become more famous for a series of highlight-reel crashes than any true display of driving ability.

Maybe the fascination is not with Kimi, after all. Perhaps the hubbub is really about the man Raikkonen threatens to bring with him as majority owner of ICE1 Racing, Foster Gillett. 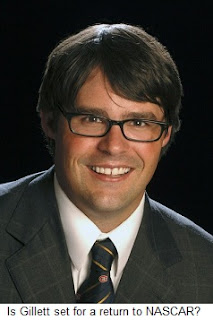 You remember Gillett, the 190-pound silver spoon who carried water for his father, George, while they laid waste to the once-proud franchises known as Evernham Motorsports and Richard Petty Motorsports. After arriving in an explosion of hype and grandiose promises, the Gilletts proceeded to run Ray Evernham out of his own building and reduce Richard Petty from "King of Stock Car Racing" to "impotent ceremonial figurehead" in a matter of a few short months. Over-leveraged and overhyped, the Gilletts became a NASCAR version of Smokey and the Bandit's Big and Little Enos; bulling their way through a series of horrible decisions that left a wide swath of unpaid bills and broken promises in their wake.

Until recently, it appeared the Gilletts would join J.D. Stacy, Bobby Ginn, Alex Meshkin and Michael Holigan on the short list of the sport's all-time most inept owners, until reports surfaced this week that "Little Enos" is apparently game for another crack at NASCAR team ownership.

"Kimi Raikkonen must not be as smart as people say he is," said Evernham when told of the plan this week. "I can't imagine anyone doing business with them, considering (Gillett's) past history. There are a lot of people out there who are still owed a lot of money. It's a joke."

Evernham said he makes "absolutely no distinction" between George and Foster Gillett, saying both men "sat in all the meetings and made the decisions. One is as responsible as the other," said Evernham, for their mountain of unpaid bills and laid off former employees.

Foster Gillett's return to NASCAR -- if it happens -- is like John Dillinger dropping by the bank a day after the heist to ask if he qualifies for a free toaster, and anyone who deals with ICE1 Racing on anything but a cash-in-advance basis deserves the screwing they will almost certainly receive.
Posted by Dave Moody at 11:43 AM