Blaney And Baldwin Prove They Belong

There are some in the NASCAR community who would like to see Tommy Baldwin and Dave Blaney run out of the sport. Sunday afternoon at Talladega Superspeedway, Baldwin and Blaney nearly made a run to Victory Lane. 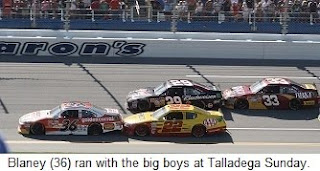 With just five laps remaining in Sunday’s Aaron’s 499, Blaney led the field in his Tommy Baldwin Racing/Golden Corral Chevrolet, fighting off repeated challenges from drivers far better financed than he. Carl Edwards took a shot at Blaney, but failed to wrestle away the lead. Jimmie Johnson, Jeff Gordon, Dale Earnhardt, Jr., and Clint Bowyer all threw their cars to the outside of Blaney’s Cinderella Chevy, only to be stiff-armed by the “Buckeye Bullet” with a healthy push from surprise drafting partner Kurt Busch.

Blaney -- who hasn’t managed a Top-10 Sprint Cup finish since 2008 – was attempting to join Richard Brickhouse, Jody Ridley, Ron Bouchard and Bobby Hillin on a long and storied list of surprise Talladega winners. Blaney’s bid to force his heavy right foot into Talladega’s glass slipper brought the fans to their feet, but his carriage turned into a pumpkin when he spun off Busch’s front bumper with two laps remaining and limped home to a 27th-place finish.

“It could have been good, a really nice accomplishment for a little team,” said Blaney afterward, buried neck-deep in what might have been. “Our car was just so fast, it was amazing. I just didn’t get it in the right spot at the right time. I guess now it is just a morale booster. We’ll take all the good we can out of it and go.”

Blaney's Talladega performance will do little to silence the start-and-park critics; a pitbull-fierce group whose race experience is somehow ruined by three cars retiring to the garage with a handful of laps complete. They will continue to brand Blaney, Baldwin and their fellow start-and-parkers “not real race teams,” saying they should either try harder, or not try at all.

“I thought it was pretty cool to see Dave up there in the closing laps,” said Jeff Gordon, who escaped the wrath of the naysayers despite spending most of his day riding in the back of the pack, not trying at all. “It didn’t matter who he was pushing, or who was pushing him. Dave is a great race car driver (and) he seems to know his way up there.”

There are no moral victories in NASCAR, and while Sunday’s outcome was bitterly disappointing for both Blaney and his team, it doesn’t change the fact that they were a force to be reckoned with in the final laps.

Blaney and Baldwin come under constant fire for practicing the much-maligned art of “start and park,” but they proved their worthiness once and for all at Talladega. Once called “thieves” by Texas Motor Speedway President Eddie Gossage, they justified their presence in the NASCAR garage, speaking eloquently for their right to continue hammering out a meager subsistence in a sport so totally dominant by the powerful and the rich.

If only for a few laps Sunday, Baldwin and Blaney proved that underdogs still deserve their place in NASCAR.
Posted by Dave Moody at 12:31 PM