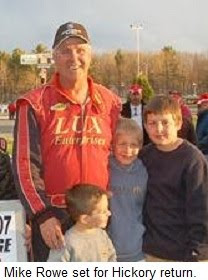 The 2006 PASS National champion comes to Hickory as the reigning NASCAR Whelen All-American Series Maine State champion, after claiming that title in 2010 for the second consecutive season. His lengthy resume’ includes championships on the American-Canadian Tour and PASS South Series, seven Late Model championships at Maine’s Oxford Plains Speedway, a trio of wins in that track’s showcase event; the TD Bank Oxford 250 and solo titles at the Beech Ridge and Wiscasset Raceways in his native Maine. Rowe also knows the way to Victory Lane at Hickory Motor Speedway, having emerged victorious in the inaugural “Easter Bunny 150” in 2006.

He will drive a Chevrolet Impala SS fielded by Godfather Motorsports; a new team co-owned by Jim Gallison, Jr. and Motor Racing Network lead turn announcer and Sirius NASCAR Radio host Dave Moody. “When Dave Moody asked if I was interested in driving the RainEater Wiper Blades car, I jumped at the chance," said Rowe. "We’ve been friends for 25 years, and nothing would make me happier than to hand him a trophy in Victory Lane.”

“Mike Rowe is a short track racing legend,” said Moody, “and there is nobody we would rather put in our car for its maiden voyage. This is an exciting time for all of us at Godfather Motorsports, and we can’t wait to test ourselves against the best Super Late Model teams in the country.”

The April 23 race at Hickory Motor Speedway is the first of approximately 15 scheduled starts for Godfather Motorsports in 2011. A complete race schedule, featuring an exciting, all-star lineup of drivers, will be announced in coming weeks. “We’re going to grab people’s attention,” said Gallison. “Our driver roster will be second to none, and we look forward to announcing the details in the next few weeks.”