Canadian businessman Steve Meehan has purchased the Baker Curb Racing NASCAR Nationwide Series team, and will run a limited schedule of events this season in both the Nationwide and Sprint Cup Series with countryman JR Fitzpatrick at the wheel. 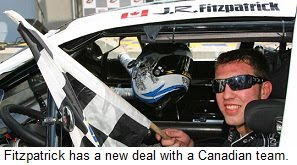 The 46-year old Meehan is founder of the Investment Planning Counsel and sold his company to IGM Financial or $95 million in cash and stock options in 2004. He finalized the purchase of Baker Curb Racing following the Bristol race earlier this month, and will finance the effort himself in the short term, while attempting to attract sponsorship from north of the border for his new, all-Canadian team. Meehan said he hopes to run Fitzpatrick in a handful of Sprint Cup races this season, with an eventual goal of full-time competition in NASCAR’s premier series by 2013.

Fitzpatrick is a former champion of what is now the NASCAR Canadian Tire Series, claiming that title in 2006 at the age of 18 and finishing second in championship points a year ago. The Cambridge, Ont., driver has nine career starts in the NASCAR Nationwide Series and 13 in the Camping World Trucks. He has made two Nationwide appearances this season, finishing 42nd in the season opener at Daytona International Speedway and 20th last weekend at Auto Club Speedway. Both of those races were under the banner of Baker Curb Racing, which has struggled recently due to lack of sponsorship.

Earlier this year, owner Gary Baker expressed hope that he might save his team with a last-minute infusion of capital, saying, “The rumor of our doors being padlocked is reminiscent of when Mark Twain said, `rumors of my demise have been greatly exaggerated.’ We are going full-bore toward finding sponsorship for next year.” That backing never materialized, however, forcing Baker to explore the possibility of a sale.

Fitzpatrick expressed excitement with the new deal, telling Toronto’s Globe and Mail, “I think it’s fantastic. Steve is a really good guy, he’s Canadian and he really wants to see Canadian corporate sponsorship and Canadian drivers. He really believes in me… and he is definitely going to push my career along. I am glad to be a part of it.”

The new team was originally scheduled to compete in Nationwide competition at Texas Motor Speedway next weekend, but the ownership change has pushed back that timeline. They will now debut at Nashville in three weeks.
Posted by Dave Moody at 10:14 AM