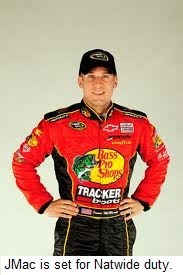 Phoenix Racing announced today it will enter this weekend's Aaron's 312 NASCAR Nationwide Series race at the 2.66-mile Talladega Superspeedway, and the team will do so with a familiar face behind the wheel. 2010 Daytona 500 winner Jamie McMurray will drive the #1 Phoenix Construction Chevrolet Saturday, in search of his third victory for Phoenix Racing. The other two came at Rockingham Speedway in 2003.

"This is a great opportunity to race for a win," said McMurray. "James Finch and everyone at Phoenix Racing always prepare fast cars for Talladega. It's fun to race with these guys, and I'm looking forward to try to get another win with them."

Phoenix Racing is a 12-time winner in the NASCAR Nationwide Series and is looking for their first win at Talladega to go with one Talladega win in Sprint Cup Series competition.

Team owner James Finch expressed confidence that McMurray is capable of bringing home the winner's trophy this weekend, saying, "Jamie has proven that he is one of the best at plate races."
Posted by Dave Moody at 4:02 PM