Two-time NASCAR Busch Series champion Sam Ard is auctioning some of the keepsakes from his legendary NASCAR career on EBay, in an attempt to raise money for his ongoing care. 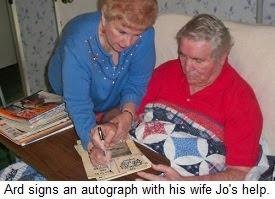 Ard suffered career-ending head injuries during an October 20, 1984 Rockingham Speedway crash while racing in what is now the NASCAR Nationwide Series. The 1983 and 1984 series champion has battled both Alzheimer’s and Parkinson’s diseases; afflictions his doctors say were likely hastened by his racing injuries. His wife, Jo, continues to serve as his major caregiver, but has been diagnosed with a degenerative eye disease that is slowly robbing her of her vision. 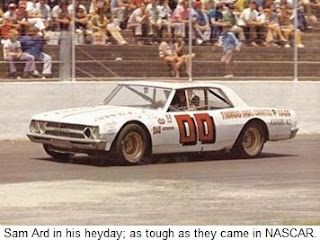 The Ards have fallen into financial difficulty in recent years, despite efforts by a number of NASCAR Sprint Cup Series drivers – notably Kyle Busch and Kevin Harvick – to contribute to their cause. In 2008, Harvick presented Ard’s son Robert with the Chevrolet Van used in a television commercial featuring Harvick and his then-sponsor, Shell Oil. Busch has contributed to the family on multiple occasions, as well, but more needs to be done.

A number of items are currently up for bid, including autographed race programs, diecast cars and even a Late Model Sportsman “Lap Leader” trophy from the 1982 Dogwood 500 at Martinsville Speedway. Bidding ends within the next four days, depending on the specific item, and all proceeds will go directly to Sam and Jo Ard. To bid on an item, simply go to www.EBay.com and search “Sam Ard.”

UPDATE: To assist the Ards more directly, send your monetary contribution to 1237 Bass Rd. Pamplico SC, 29583. WalMart gift cards are especially valuable, since the family uses them for food, clothing, laundry and personal care products for Sam.
Posted by Dave Moody at 4:46 PM