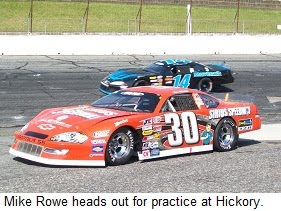 Mike Rowe and the #30 Sirius Speedway/Bea’s Gift Baskets.com Chevrolet suffered a disappointing night in Saturday’s season-opening “Easter Bunny 150” at the legendary Hickory Motor Speedway. The Godfather Motorsports team was forced to play catch up after a much-needed practice day fell victim to rain Friday. An undiagnosed brake bias issue caused handling problems that plagued the team throughout practice and qualifying, and with 44 of the nation's top Super Late Model teams in attendance, Rowe failed to crack the Top-20 in qualifying and was relegated to the second of two Last Chance qualifying races. He started in the 30th and final starting position in the Main Event after claiming a Promoter’s Option, but was swept-up in an early multi-car crash and relegated to a 30th-place finish. 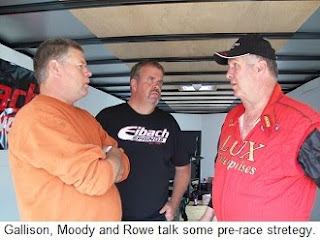 “We spent most the day chasing an issue that didn’t exist,” explained Godfather Motorsports co-owner and crew chief, Jim Gallison, Jr. “We had a problem with our brake bias adjuster that left us with about 90% front brake and created a huge `push’ in the corners. We made adjustment after adjustment, but never really saw the changes we should have seen. By the time we discovered the real issue, we had 15 minutes to totally reset the chassis before the heat race. The guys busted their tails, but we were still a little off.”

“I think we would have been fine in the 150,” said Rowe. “The car was a lot better, and we planned to pit under the first caution flag to make a chassis adjustment. Unfortunately, we were the first caution flag.” A multi-car crash in turn two left Rowe with nowhere to go, and the #30 Sirius Speedway/Bea’s Gift Baskets.com Chevrolet suffered damage to the left-front suspension that ended the team’s evening.

“We really needed that Friday practice day,” said Rowe. “When it rained out, it put us behind the eight ball. A new car always needs sorting out, and we just didn’t have the time we needed Saturday. This is a good race car and a good race team. These guys work as hard as any team I have ever worked with, and I’ll be happy to work with them again if they invite me back.”

Next up for Godfather Motorsports is the PASS 150 at Motor Mile Speedway in Radford, VA on Saturday, May 28 with third-generation driver Danny Bohn at the wheel. 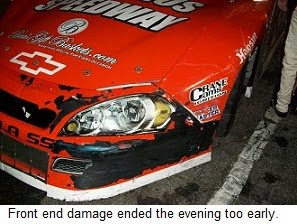