Kevin Harvick won Sunday's “Goody’s Fast Relief 500” at Martinsville Speedway, earning him one of Clay Campbell’s coveted grandfather clock trophies and a full measure of early season championship momentum. More important, though, was lesson it provided on the value of sticking together when times get tough. 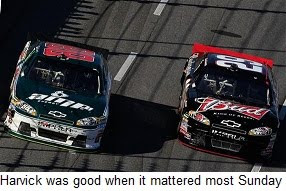 Since first being thrust into the vacated seat of NASCAR’s greatest champion when Dale Earnhardt lost his life on the final lap of the 2001 Daytona 500, Harvick has often been anything but a “stick-together” kind of guy. He took Earnhardt’s mourning team back to Victory Lane just three weeks later, but in decade that ensued, the California native has not always dealt well with the pressures and demands of being a marquee NASCAR driver.

In 2002, he served a one-race suspension from Cup competition after a post-race Martinsville Truck Series meltdown that featured him leaping over the hood of Greg Biffle’s machine and wrapping his hands around his fellow driver’s neck. Two years ago, he railed long and loud about Richard Childress Racing’s lack of competitiveness, to the point where many observers doubted he would re-sign with the team when his contract expired. Eventually convinced that RCR was closing the competitive gap, Harvick elected to remain with the team. And while the last 12 months have featured a handful of his familiar in-car verbal explosions, both he and his Gil Martin-led crew have evolved into one of the sport’s top teams.

Martin and company no longer take Harvick’s rants to heart, realizing that they stem from a deep-seated, all-consuming competitiveness, rather than any personal ill will. And Harvick has learned to temper his criticism when he can, and apologize afterward when he cannot.

Last weekend’s Martinsville victory provided the latest lesson in Harvick’s ongoing championship tutorial. The day began disastrously, with an ill-handling car incapable of running in the Top 20. Harvick responded poorly, with a lengthy period of verbal lambasting directed at his team. But by the end of the 500-lap grind, however, his Budweiser Chevrolet was the class of the field, surging past Dale Earnhardt, Jr. with just a handful of laps remaining and rolling into Victory Lane for the second time in as many weeks. The win pushed Harvick all the way to fifth in the championship standings -- just 15 points behind leader Kyle Busch – and opened the door for an interesting bit of post-race psychoanalysis from the driver. 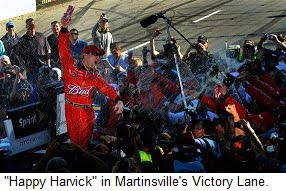 "I'm a high-strung person and I turn into a lunatic when I get in the car," admitted Harvick after his come-from-behind win. "I get in this mind frame that I just can't get out of while I'm in that car. All I want to do is do good for our sponsors and for our team. That's really what it's all about, (but I) just turn into this crazed animal.

“Then I wind up apologizing more than I do anything else.

It was a rare moment of introspection from NASCAR’s newest championship contender, a sign that in addition to age, maturity and experience, Harvick has gained the ability to acknowledge and analyze his own competitive shortcomings.

Earlier this season, Harvick displayed his newfound composure after engine failure relegated him to a 42nd place finish in the season opener at Daytona International Speedway. The Harvick of old would almost certainly have blown his top, bemoaning the difficulties of overcoming such a disastrous start to the season. The new Harvick, however, spoke calmly and in measured tones, saying, “When we left Daytona, I was laughing because it had been 156 races since we had had an engine problem. It's hard to get down on anybody (who is) 1-for-156 in this sport. There's no reason to get down on those guys, because that's going to cause more harm than good."

With two consecutive wins and a new attitude in tow, Kevin Harvick may finally have acquired all the tools necessary to claim his place at the head of the NASCAR class.
Posted by Dave Moody at 11:09 AM