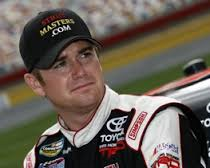 Timothy Peters, driver of Red Horse Racing's No. 17 Toyota Tundra in the NASCAR Camping World Truck Series, will return to his Late Model roots and compete in the seventh annual Denny Hamlin Short Track Showdown on Thursday, April 24 at South Boston (Va.) Speedway. The veteran driver will be behind the wheel of the No. 17 Autos by Nelson Toyota Camry at a track where he's found much success. The team will be led by Marcus Richmond, Peter's childhood best friend, and his current crew chief in the Truck Series. The duo won the Track Championship at South Boston Speedway in 2004, and multiple races at the South Boston, Va. race track since then.


"The (Short Track) Showdown should be a lot of fun." said Peters. "I love that it's at South Boston Speedway this year because it's a home track for me. I'm really looking forward to racing the No. 17 Autos by Nelson Camry. Marcus (Richmond) designed it just for this event so it should be good!"
The Late Model that Peters will be driving was custom designed for short track racing by crew chief Marcus Richmond, and built by local company A&E Race Cars, owned by Allen and Earl Rice.
"Everyone that competes [in the Short Track Showdown] puts a lot of time and effort into the race," said Richmond "Not only is it a fun race because of all the different drivers who show up to race, but it also supports a great cause."
The Denny Hamlin Short Track Showdown began in 2008 at Southside Speedway, a local short track near Hamlin's hometown of Chesterfield, Va., outside of Richmond, before moving to Richmond International Raceway in 2011. For its seventh year in 2014, the race moves just over 100 miles to the southeast of Richmond to another short track with a long history in stock car racing, South Boston Speedway.
The celebrity Late Model race features a collection of NASCAR veterans and local Late Model stars racing for bragging rights and to raise awareness and funding for the Denny Hamlin Foundation, which supports the Cystic Fibrosis Research Lab at The Children's Hospital of Richmond at VCU.
Advance tickets to the Short Track Showdown are available by calling the track ticket hotline at 1-877-440-1540. General admission is $20 Advance/$25 Race Day for Adult; $10 Advance/$15 Race Day for Youth (ages 12-17); and Free for Children ages 11 and under (with an Adult ticket purchase). Season passes are not honored for this special event.
Peters currently leads the championship point standings in the NASCAR Camping World Truck Series, which returns to action at Kansas Speedway on Friday, May 9.
Posted by Dave Moody at 1:55 PM