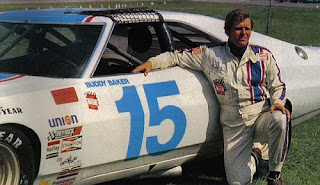 At six feet, six inches tall and over 240 pounds, there are few challenges in life that Buddy Baker hasn’t faced, head-on.

NASCAR’s "Gentle Giant" manhandled race cars like few others could in his 33-year driving career, wrapping his country-ham sized hands around the steering wheel, stomping his size-13 foot through the firewall and driving to Victory Lane 19 times in a storied Cup Series career.

Last night, Baker revealed his latest challenge, announcing on Sirius XM NASCAR Radio’s The Late Shift that he has been diagnosed with inoperable lung cancer.

“Just before Thanksgiving, I started having horrendous shoulder pain,” said Baker, who was eventually advised to undergo rotator cuff surgery. “I said, ‘Good, I’ll be back in a couple of weeks.’ Not so.”

Doctors eventually discovered what he called “a huge tumor in my lung,” and delivered a sobering diagnosis.
"There comes a time when you talk to the doctor and say, `What are my chances,’ and there's dead silence," said Baker. "I asked, 'How long?' (The doctor said), `Well, we don't own the hotel and we don't know when we check out. But it's something that we cannot fix.’”

Baker has been at the center of NASCAR virtually since birth. The son of Hall Of Famer and 46-time race winner Buck Baker, Buddy spent his formative years turning wrenches on his father’s cars, and fending off post-race challengers in an era when Victory Lane ceremonies often included a good right-cross to the chin.

Not many people picked fights with Buck Baker, and fewer still wanted any part of Big Buddy. 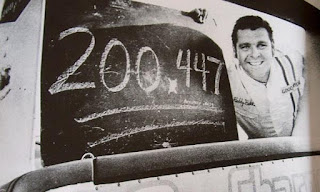 Once he climbed behind the wheel himself, records quickly began to fall.

He won the 1980 Daytona 500 at an average speed of 177.602 mph; a mark that remains untouched today. Later that year, he became the first driver to top 200-mph on a closed course during a NASCAR-sanctioned test at Talladega Superspeedway.

Baker was best where the speeds were highest. His heavy right foot and take-no-prisoners approach earned him four victories at Talladega, a pair of Daytona wins in 1980 and `83, consecutive World 600 scores in 1972 and `73, and da ominant win in the 1970 Southern 500 at Darlington that saw him lap every car on his way to Victory Lane.

He lost a few races along the way, as well, due to engines, transmissions and tires of the era that proved unworthy of his unyielding, all-out style. He remains unapologetic today, insisting that “hammer down” was the only way he knew to race.

Win or lose, Baker always came away with a story to tell. One of his favorites involved a late 1960s race at a dirt track run by his longtime friend, Don Naman. A hard crash into the backstretch fence left Baker with broken ribs, requiring a trip to the local hospital. The ambulance crew strapped Baker onto a stretcher – at least as much of him as would fit – and loaded him into the ambulance. As they crossed the backstretch, however, the back doors of the ambulance flew open, spilling Baker onto the track as the Pace Car – with field in tow – closed in.

“They had me strapped down tight, but I managed to get one arm free,” recalled Baker. “I started waving like there was no tomorrow, praying those guys would see me.”

Baker bounced across the track and into an infield ditch, toppling face-first into the mud. When the horrified ambulance crew returned to retrieve him and righted the stretcher, Baker growled, “When I get off of this thing, I’m gonna kill all of you.”

No one doubted that he could. 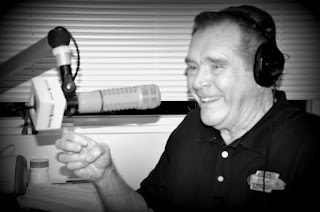 When his driving days came to an end in 1992, hastened by a nagging neck injury, Baker transitioned seamlessly to television, serving as an analyst for The Nashville Network and CBS. In recent years, he has been a mainstay of SiriusXM NASCAR Radio’s weekday lineup, co-hosting "The Late Shift" and "Tradin' Paint."

Last night, Baker said he is retiring now, rather than allow the quality of his broadcasts to suffer.

“As I started to come back after my first lay out, I realized things weren't the same,” he said. “It sounds like I’m in a well, trying to yell up. With the quality that SiriusXM brings, I just wasn’t living up to what (I am) supposed to do.

“I knew it was time to say goodbye to a great racing career.”

Baker has no regrets and wants no sympathy.

"I was lucky enough to have a great career as a broadcaster and also over 30 years behind the wheel," he said. "For those that feel sorry for me, hey, I'm 74 years old. I have great friends...and am a blessed person. The toughest part for me is not being able to talk to some of our regulars that are almost like family.

"I will never have friends or family that I think any more of than the people I've talked to over the past four or five years (on radio). I'm going to miss the heck out of not being around, but how many people would give anything to live a charmed life like I have?