COMMENTARY: Despite Happy Outcome, NASCAR Can Learn From Dillon's Crash 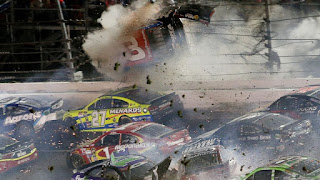 Monday morning’s horrific, final-lap crash at the conclusion of the Coke Zero 400 at Daytona International Speedway received “zero grades” across the board.
Zero fatalities, zero serious injuries.
When Austin Dillon’s Bass Pro Shops Chevrolet was swept-up in a multi-car melee at the drop of the checkered flag Monday, it tore down a large section of frontstretch catch fence and left more than a dozen fans with minor injuries.

It could have been so much worse.

Dillon's car went airborne, tearing into the fence before tumbling back to the racing surface --  upside-down – and being struck at high speed by the Ford of Brad Keselowski, who slid helplessly in oil laid down by the crash.

“It happened so quick, you just hope you get through it and (live) to race again,” said an eerily calm Dillon afterward “The belts were loosening… so the hits were getting more and more violent. I held on to the steering wheel as hard as I could.” 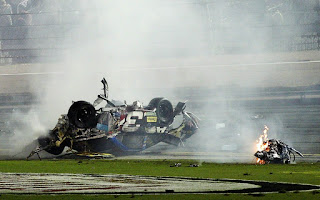 As Dillon’s car came to rest -- its steaming engine block and front chassis clip ripped away from the driver’s compartment -- members of several rival teams leapt over pit wall and raced to his assistance. As bad as it looked, Dillon’s Richard Childress Racing Chevrolet did the job it was designed to do, shedding extraneous chassis and body parts to dissipate energy, while holding its driver safe and secure. Dillon suffered only a bruised arm and tailbone, and was examined and released from the track’s Infield Care Center.

''I am going to be sore,” said Dillon afterward. “It got my tailbone pretty good and my arm. But thank the good Lord for taking care of me and for what NASCAR has done to make the sport safer.”

The crash drew uncomfortable parallels with the 2001 Daytona death of Dale Earnhardt, Sr., who drove the iconic No. 3 RCR Chevrolet that languished in unofficial retirement until Dillon returned it to the racetrack last season. Dillon’s wreck was far more spectacular than Earnhardt’s deadly crash, raising initial fears that another life had been lost on the Daytona highbanks.

"I expected the worst when I came back around,” admitted runner-up Jimmie Johnson. “I'm shocked that Austin Dillon is even alive.”

"It scared the (crap) out of me," said winner Dale Earnhardt, Jr. "I saw everything in the mirror pretty clearly (and) I was very scared for whoever that car was. I was near tears. I didn't even know who it was, but you don't want to see anybody get hurt. It's an awful feeling." 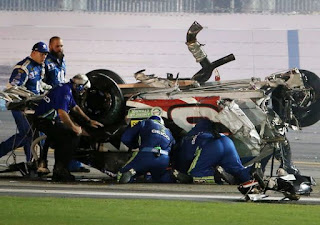 Team owner Richard Childress – Dillon’s grandfather – sweated out a few tense moments before watching his grandson climb from the demolished racer, then coolly proclaimed it, “a wild-ass crash.”

DIS President Joie Chitwood said 13 fans were treated at the scene for minor injuries. Eight declined treatment, four were treated and released from the track’s Infield Care Center and one was taken to a local hospital in stable condition.

NASCAR and track officials said the catch fence appeared to perform as designed, pushing Dillon’s 3,400-pound racer back onto the racing surface and minimizing the amount of flying debris that intruded into spectator areas.

Chitwood vowed to "work closely with NASCAR" to learn what can be improved from the crash, just as he did following Kyle Larson’s 2013 NASCAR XFINIITY Series wreck that injured nearly 30 fans, with 14 transported to local hospitals. As a result of that incident, engineers recommended eliminating spectator cross-over gates from the Daytona frontstretch, as well as adding additional cabling to strengthen the fence. Seats are now further from the track than they were two years ago, as well, a result of the track’s Daytona Rising reconstruction project.

“We're going to learn from it and see what else we can do to be better,” vowed Chitwood after the race. “I think you saw some of the improvements at work today, so what we can learn from that tomorrow and (in) the next few days, we're going to incorporate moving forward."
While still unsure about the specifics of the crash, Dillon said additional changes may be needed. 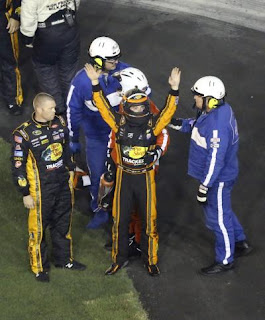 “I think our speeds are too high,” he said. “I think (we) can get good racing with lower speeds. We can work on that and then figure out a way to keep cars on the ground. That’s the next thing.”

Asked if Dillon’s crash might spur further advancements in safety, Newman invoked the memory of Earnhardt, Sr., saying, “They had an event in 2001 (and) they've had several events since then. They just don't pay attention to safety. Simple as that."

Auto racing is – by design – a dangerous sport. Even with recent safety advances like SAFER barrier technology, carbon-fiber containment seats and helmets, impact-absorbing door foam and head-and-neck restraints, drivers can still be hurt or killed at the wheel of a race car. Until the laws of physics are repealed, a 3,400-pound stock car traveling at 200 mph will continue to test the mettle of barriers and fences.

The immovable force will continue to bow before the might of the unstoppable object, and while DIS, NASCAR and Richard Childress Racing have much to be proud of today, last night’s outcome should not delude us into a false sense of security that prevents us from learning even more.