For Roush Fenway Racing, The Early Returns Are Encouraging 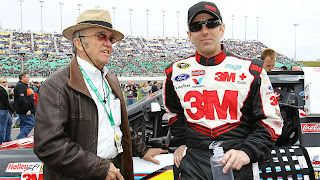 After a number of sub-par seasons, Roush Fenway Racing is off to a solid start in 2016, giving longtime fans of the Ford team something to cheer about for the first time in recent memory.


RFR started the weekend strong at Atlanta Motor Speedway, practicing well and qualifying all three of its cars in the Top-15 for the first time since Michigan in the fall of 2014. Trevor Bayne led the way with a third-place qualifying run, followed by teammates Ricky Stenhouse, Jr. in fifth and Greg Biffle 14th.
Stenhouse then overcame a late pit-road tangle with Michael McDowell to claim a 10th-place finish in Sunday’s Fold of Honors QuikTrip 500, with Biffle and Bayne trailing in 13th and 22nd place, respectively. For a team that hasn’t put three cars in the Top-15 since the 2014 Bristol night race, Sunday’s verdict was clearly a step in the right direction; not to mention a much-needed morale boost.
“Our Ford EcoBoost Fusion was like I hoped it would be,” said a smiling Stenhouse after the race. “Practice felt good and I was hoping that was going to correlate over to the race. We were exactly where we thought we would be. We weren’t real good for the first 10 laps of a run, but really good at the end of the run. I’m happy with all the hard work that these guys put in. 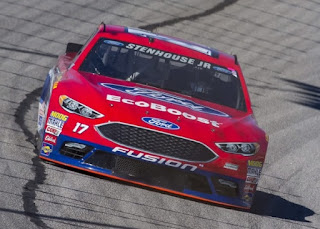 “It’s only one weekend,” he cautioned. “I hope to get consistent with that and I’m looking forward to going to Vegas next week.”
Bayne said Sunday’s results were not a complete surprise, pointing to a pair of encouraging runs last season with NASCAR’s new, low-downforce aerodynamic package.
“We saw that we had speed last year at Kentucky and Darlington,” Bayne said. “I was hoping for a Top-15 day. That’s what we’re working toward and that’s our goal every week – to run Top-15 until we can run Top-10 every week -- be consistent and don’t make mistakes.


“Our car had good speed, but it was just difficult to get through the center of the corner. I’m really proud of my guys’ effort on this AdvoCare Ford. We had a great qualifying effort and made a lot of gains from where we were to now. I’m looking forward to seeing what we can do in Vegas.


“It’s not just a one-race, fluke deal,” he promised. “I think we’ve got some speed in our cars. It comes from a lot of effort and getting through the hard times. We’ll have hard times to come, everybody does. But I think we can fight through it as a group.” 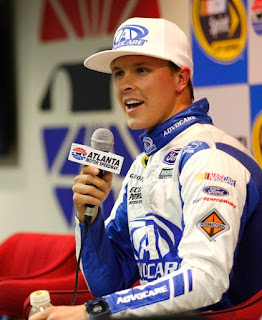 Bayne said those outside the organization don’t understand the effort involved in digging out of a competitive hole.


“People aren’t on the ground going through it with you,” he said. “They just see your results and want to beat you down and say, ‘What’s going on?’ They think you just kick back on the couch and hang out and go to the race track and run 29th. That’s not what we do.”


Jack Roush’s boys have not graced a Sprint Cup Series Victory Lane since Carl Edwards prevailed on the road course at Sonoma Raceway in 2014. Last year, the team failed to place a driver in the Chase for the first time in their history. And while there’s still plenty of work to do before a return to the Glory Days, Sunday’s performance indicates that there just might be a silver lining behind RFR’s cloud, after all.


With two races complete in the 2016 season, Stenhouse stands 13th in the championship standings. Biffle is 24th, with Bayne 27th. Those aren’t vintage RFR numbers, and no one inside the team’s Concord, NC headquarters is even remotely satisfied. But for an organization that has spent most of the last two seasons slumped against the competitive ropes with its collective nose bloodied, it’s an encouraging start.


“One of the things that has been preached to us from Kevin Kidd, Robbie Reiser and Jack Roush is execution,” said Bayne Sunday. “They say our cars are going to get better. We’re going to work through it, we’re going to get our cars faster. And when those times come, we have to be able to execute.