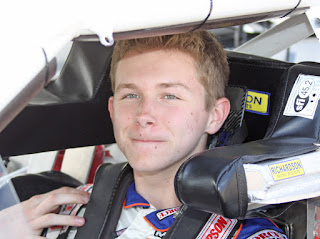 Ohio-native Matt Tifft will drive a 13-race schedule in Joe Gibbs Racing’s No. 18 Toyota Camry on the NASCAR XFINITY Series.


“I am honored to have the opportunity to work with Joe Gibbs Racing for the 2016 season,” said Tifft. “I feel after our run last year at Kentucky that this is a great fit for me with an outstanding and well-respected organization, and I look forward to a very exciting and successful year driving the No. 18 Toyota Camry.”
Over the years, Joe Gibbs Racing has encouraged young drivers to gain experience by developing in the NASCAR Camping World Truck and NASCAR XFINITY Series. In recent years, names such as Daniel Suarez and Erik Jones have proven the JGR program successful. In 2015, Suarez earned NASCAR’s Rookie of the Year honor while finishing fifth in the XFINITY Series’ driver ranking. Jones captured the NASCAR Camping World Truck Series Championship in 2015 and earned two victories while driving a part-time XFINITY Series schedule. Both Suarez and Jones will compete full-time in the XFINITY Series in 2016, affording Tifft the opportunity to continue to learn alongside them.
Executive Vice President of XFINITY Series Operations at Joe Gibbs Racing, Steve DeSouza commented on Tifft’s signing, saying, “We take a lot of pride in using our XFINITY Series program to develop talent. That not only includes our drivers, but crew chiefs and our team personnel as well. It’s great to have Matt expand his program with us in 2016 and have the opportunity to run alongside Erik and Daniel for a good portion of the season. When you add Cody Coughlin to our roster, who will drive part-time in the Truck Series with KBM, we feel fortunate to have so much young talent in our system.”
“I am very excited to work again with Daniel Suarez, Erik Jones and Kyle Busch,” added Tifft. “Last year, they helped me a ton with development, and I will continue to try and advance my career by drawing on the experience and talent of those around me. Hopefully I can also help them in some ways as well. I look forward to a very exciting and successful year driving the No. 18 Camry, and can't wait to get this year started!
Tifft is also a second-year student at the University of North Carolina, majoring in business management.


Primary sponsorships will be announced at a later date.
Posted by Dave Moody at 11:27 AM