Sebastien Bourdais said yesterday that both the Indy Racing League and Champ Car World Series will die if they cannot settle their differences and merge into one. Bourdais, the two-time defending Champ Car champion, said, "It's not a matter of trying to make it happen. It's do it or die. Both series are struggling so bad financially (that) the teams can't put programs together, and the drivers aren't getting paid any more. I think it's very straightforward. Either we succeed at this unification, or we all are going to run out of jobs very soon. "

With all due respect to my friend SeaBass, most fans of Open Wheel racing came to that same, sad conclusion years ago.

Tony George's IRL will start a maximum of 20 cars in its next event at Japan's Twin Ring Motegi on April 22nd. Kevin Kalkhoven, Paul Gentilozzi and Gerry Forsythe's rival Champ Car World Series will begin its season this weekend in Long Beach with only 19 or 20 cars on the grid, as well. The Champ Car roster is padded with a slew of "Who Dat?" drivers, including Dan Clarke, Jan Heylen, Nicky Pastorelli, Charles Zwolsman and Will Power. Not to be outdone, the IRL features such household names as Ed Carpenter, P.J. Chesson and Kosuke Matsuura. Don't bother sending me e-mails listing the accomplishments and resume's of each driver; I already know all of that. My point is not that these guys can't drive, it's that all eight of them combined won't sell 100 tickets.

The Indy Racing League schedule fell from 17 races a year ago to just 14 this season. League President Brian Barnhardt claims that to be a good thing, allowing teams to trim their budgets and compete more economically. The owners say otherwise, and a slew of offseason layoffs testifies to that fact. Simply put, it's impossible to justify a 12-month payroll for 14 measly races. Champ Car is in the same dire straights, with just 15 races on its 2006 docket; two of them overseas in Korea and Australia. To get to that 14-race mark, Kalkhoven, Gentilozzi and Forsythe have been forced to promote many events themselves, reportedly losing money at every stop.

Both series' are on the road to ruin, but somehow, none of the men in charge seemed able to see the writing on the wall until very recently. A few weeks ago, George and Kalkhoven finally began meeting face to face, in an effort to lay the groundwork for a lifesaving reunification. (See "George: Reunification Talks Underway" in the March 24th archive for more) Whether they waited too long to start CPR remains to be seen. 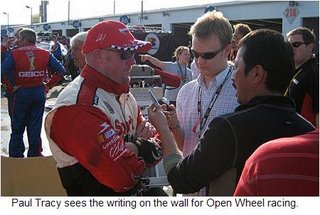 for open wheel racing. We'll just have to wait and see if that happens. It's really not in the control of the teams or the drivers. It's down to Kevin and Tony, and it's got to be equitable for both. You can't go into it saying, `We're going to have a prenup, and I'm going to get all of this, and you're going to get that.' It can't be 60/40 or 80/20. It's got to be fair for everybody."

There are massive amounts of work to be done if reunification is to be achieved by 2008 or 2009. Major questions about chassis, tires, sponsorships and TV contracts must be answered, and a single misstep along the way could doom the entire process. But the fact that Bourdais, Tracy and their Open Wheel compatriots are finally willing to acknowledge the 12,000-pound gorilla in their living room may be the best sign of all.
Posted by Dave Moody at 12:05 PM